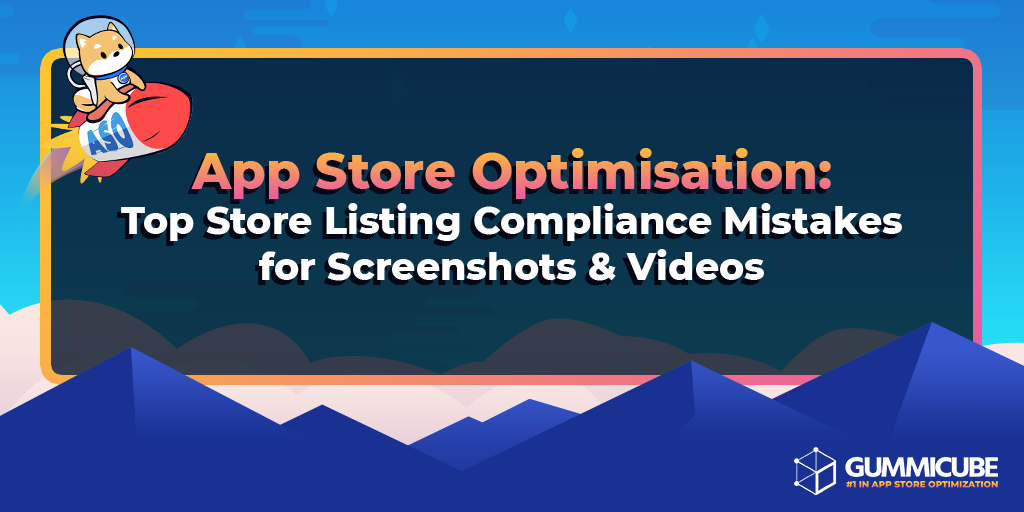 How do you make your app stand out?

You may have already researched how App Store Optimisation can help your app reach users and gain installs and are on your way to enacting your mobile marketing strategy. Strategies and best practices may vary from app to app, but there is one critical element that matters for any app: developer guideline compliance.

Both the Google Play Store and Apple App Store have different guidelines. Much like the allowed creatives and the dimensions used in each store, there are some overlapping elements while others are inconsistent. Be sure to avoid common compliance mistakes, or else your app may be rejected.

What do you want your screenshots to convey? Whether you’re focusing on positive reviews, benefits of using the app, or its features, your screenshot set needs to accurately display your app in use.

Users need to see what functions they can expect when using your app. If the screenshots don’t represent what your app does, how can they convince anyone to download it?

Not only that but failing to convey the UI in your creatives will get your app rejected. Screenshots should fully and accurately display the UI, so a screenshot set that does not show the app in use is a quick ticket to removal. Apple is especially strict about this, as it states in its guidelines.

“2.3.3 Screenshots should show the app in use, and not merely the title art, log-in page, or splash screen. They may also include text and image overlays (e.g. to demonstrate input mechanisms, such as an animated touch point or Apple Pencil) and show extended functionality on device, such as Touch Bar.”

The screenshots you use need to be an accurate reflection of the in-app functionality and features – there’s no spicing them up for advertising.

While small effects can be used to highlight certain sections of a page, they must be kept to a minimum to avoid being misleading. This can be subjective, based on the reviewer, but it is best to err on the safe side. If your screenshot is showing off an explosion in a mobile game, the explosion needs to occur within the game.

Otherwise, the screenshots can be flagged for displaying deceptive imagery and get the app rejected. Honesty is the best policy.

App preview videos are held to even higher standards. As the videos are designed to provide a preview of the app, they need to be as accurate to the user experience as possible.

App preview videos must display actual functionality, and any editing that may imply additional functions will raise a red flag. No matter how impressive your special effects are, if they’re not part of the app, they should be left out.

“2.3.4 Previews are a great way for customers to see what your app looks like and what it does. To ensure people understand what they’ll be getting with your app, previews may only use video screen captures of the app itself.”

If your video appears to show a function that’s not available, it could be seen as misleading. That alone is grounds for rejection. Even transitions should reflect in-app functionality to avoid giving users the wrong idea about what your app can do.

Use the Right Handset

You may want to use your screenshots to let users know how the app will look on their phones. It’s common to see screenshots and videos including images of a handset, but not just any device will do.

It is critical to use the handset tied to your platform in your creatives. This means that iOS apps should use iPhone/iPad devices in their screenshots, and apps on the Google Play Store should use Android devices. It sounds like a simple concept, but it’s oftentimes overlooked.

Mistakes Are Not Exceptions

There are instances where screenshots use the wrong handset. It could be that the reviewers for the store overlooked the mistake when approving the app, but in most cases, using the wrong handset on either store will eventually lead to rejection.

Do not assume that an app is in the clear if this mistake gets overlooked once. In fact, it’s common for an app to be accepted once then receive a surprise rejection later on. Mistakes can happen, but when they do, it’s important to address them immediately.

Videos can be an excellent addition to a creative set. They can show the app in action, demonstrate usage and convey the UI in a clear, visual manner. Of course, that assumes they’re created according to the store guidelines.

Both the Google Play Store and Apple App Store have different video guidelines; what’s acceptable in one may not be allowed in another. Developers will often design different videos for each store to ensure they’re compliant on all fronts.

When you design your video, you may want to show happy users enjoying the app. Perhaps it’s a hiking app and you want to show users out on a trail, or you’d like to show the fierce competition of a mobile game. On the Apple App Store, however, that would get your update denied.

App Store promotional videos can contain only footage captured directly from the app. Any outside footage is immediate grounds for rejection.

If you have a delivery app, for instance, you can use the video to show how easy it is to place orders and the delivery notifications. What you cannot do is include a clip of the package being delivered or a happy recipient, unless that video is available inside the app.

As the video can only show in-app functionality, even little effects like animated hands to illustrate touch gestures aren’t allowed. Videos can include touch hotspots to illustrate tapping or swiping effects, but even those should be used sparingly.

Google Play is a bit looser with its video guidelines, but there are still rules developers must follow.

Play Store videos are linked directly to YouTube. While YouTube videos can include ads, developers must turn off monetization and ads for the videos used on the Play Store.

Disable ads for your video to be shown on the Play Store. When users browse the Play Store, we want them to see a video about your app, not someone else’s ad, as this can be confusing for users.

The YouTube video design also means that videos will appear in landscape format. If the app itself is used in portrait mode, the landscape video will have large black bars framing the screen. In this case, it’s recommended to add borders including additional information, artwork, or frames.

The videos must demonstrate the actual in-app experience and set the right expectations. Google recommends minimizing brand-focused elements and pre-rendered footage or cutscenes. Use those to support the in-app experience, rather than distract from it.

Unlike the App Store, Google Play videos can include outside footage. If your video includes footage of people sitting in a coffee shop using the app on their phones, that’s okay as long as it properly shows how the app works.

Your video and screenshots are great tools for garnering interest and conversions, but they must be made properly. Failing to follow the guidelines for the store the app is on can result in rejection, which will prevent you from launching new updates and keywords.

The last thing you want to do is to spend thousands of dollars creating a video only to find out that the stores won’t allow or properly display it. You need to understand the creative guidelines and follow them closely. No matter how amazing a screenshot looks, it will do your app no good if it’s rejected from the stores.

Gummicube is a global leader in App Store Optimization with more than 11 years of experience optimizing and marketing apps. Gummicube offers the leading enterprise ASO technology and agency services, providing support to clients around the world. Our company is trusted by thousands of enterprise brands and leading startups including Microsoft, LinkedIn, Bethesda, SWEAT, GrubHub, McAfee, and many others.

Dave Bell is an entrepreneur and recognized pioneer in the fields of mobile marketing and ASO. Dave is currently the Co-Founder & CEO of Gummicube - the leading global provider of data, technology, and services for App Store Optimization.