On Monday, September 20th, Apple released iOS 15 globally. Learn everything there is to know about the new features, as well as whether or not you should download it. 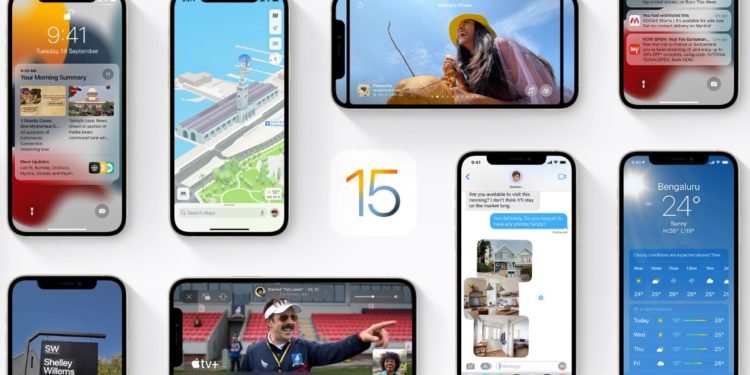 Apple has officially published the final version of iOS 15, the next major iteration of the iPhone’s operating system. It is a free download that is compatible with the iPhone 6s or later, both models of the iPhone SE, and the most recent iPod touch model (iPad users will also be able to update to iPadOS 15 and watchOS 8). The iPad’s home screen will be completely revamped, and multitasking will be made smoother and more user-friendly.

The software updates include a slew of new iPhone capabilities. Apple has introduced new FaceTime capabilities that will allow Android and PC users to join for the first time, as well as iMessage enhancements that will make it simpler to monitor links and images your pals have shared, similar to what WhatsApp does.

You will be able to add tags to your notes with the iOS 15 upgrade, making it easier to categorize items. The tags browser will allow you to see all of your tags in one location, which will be more convenient. The Smart Folders function will automatically organize notes depending on your tags, which is also quite useful.

When you press the mute button on iOS 15, an alarm will sound. It will enable users to disable tracking pixels. If you’re not familiar, these pixels are buried within emails and allow marketers to determine when an email was read and how long it was open.

Another new iOS 15 feature is Focus, which is a tool that allows users to customize their notification choices based on what they are doing. You may choose whether or not the phone vibrates or emits a sound based on your current condition. The focus will alert your iMessage contacts of your current state, explaining why they aren’t replying to your texts.

iOS 15 will have over 100 new emoji combinations. Users may now get instructions with precise arrival or departure times thanks to the new Apple Maps. Also, upon updating to iOS 15, users will have access to limitless iCloud storage. When you buy a new device and want to transfer all of your data, you may use unlimited iCloud storage to make the process easier.

Users of iOS 15 may copy and paste text directly from photographs using Live Text. OCR capability is integrated into iOS 15. iOS 15 will also have enhanced theft protection. It will allow consumers to track down a lost or stolen iPhone even if it has been wiped.

Furthermore, Apple states that “the Hello screen will clearly identify that your device is secured, locatable, and still yours” to prevent someone from purchasing a stolen iPhone unintentionally.

Notifications in iOS 15 have been overhauled, including contact pictures for people and bigger app icons. A notification summary collects alerts for distribution at a suitable time and organizes them by importance to prevent distraction.

Safari has an entirely new look. Controls are now simpler to access with one hand, allowing users to focus on the content of a webpage. For the first time, there is now a configurable start page and web extensions. The Maps app now has a new 3D representation of cities with considerably improved details, including buildings, pedestrian crosswalks, bike lanes, and other features. There is a new city-driving experience with enhanced Transit features including pinned favorite lines, alerts to depart, and AR walking directions.

Voice isolation and Spatial Audio are added to FaceTime conversations in iOS 15, so that voices sound as though they are originating from where the person is on the screen. FaceTime also supports Portrait mode and has a new grid view that allows you to see more faces at once.

iOS 15 also includes new privacy features such as Siri requests being processed directly on the iPhone, which improves responsiveness, Mail Privacy Protection, which prevents senders from knowing if an email has been opened and detecting a recipient’s IP address, and an App Privacy Report view, which shows how frequently apps use the permissions they have been granted.

Once Apple delivers the over-the-air update for iOS 15, eligible iPhone owners can manually check for and download the new version via Settings. Once the update has been downloaded, customers will be prompted if they want to apply it now or later. Users may also pick when they wish to get the new iOS 15 updates.

If you value security, consider updating Apple’s iOS 15 upgrade right immediately. iOS 15 offers a slew of security updates to your iPhone. If you missed iOS 14.8 or any previous versions of iOS, you’ll receive the security fixes from those upgrades alongside your iOS 15 update.

In addition to those updates, iOS 15 includes certain security and privacy enhancements, as well as Siri improvements. Siri requests are now handled on the device itself using Neural Engine. This increases device security. Not only for security, but the innovations iOS 15 offers are extensive, as previously stated, and it is highly recommended that you download it.