Breathing app lets you incorporate miraculous sound breathing, that has a regulating effect on the autonomic nervous system, into your daily routine.

What is Breathing App?

Often, taking a deep breath consciously is the key to relaxation. Meditation can become a helpful routine for even the busiest person, which can be followed by online apps. Simply, set aside 5 minutes of your time for this amazing Breathing app.

Breathing App focuses on resonance frequency breathing, which is a method of breathing that has a regulating effect on the autonomic nervous system and other body systems at 3-7 breaths per minute rather than our usual 15-18. It produces calm, restful alertness and other benefits that are required for the human body to function.

The app was created by Eddie Stern, a yoga teacher, author, and lecturer from New York, who came up with the idea for the app. The breathing cue sounds were created by Moby, a co-creator. The app was guided and designed by Deepak Chopra and Sergey Varichen. 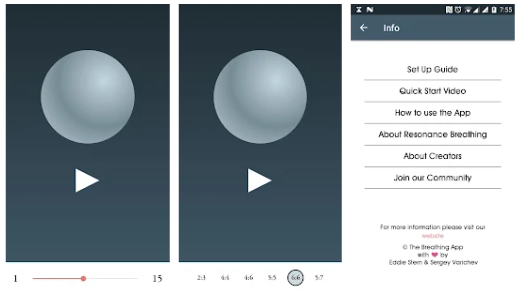 The breathing app is a must-have for our daily lives. The sympathetic branch acts as an accelerator, propelling us forward. The parasympathetic nervous system acts as a brake, slowing us down. We alternate between these two every second of the day, with each breath we take.

In today’s fast-paced, information-heavy world, however, we frequently favor acceleration. Spending just a few minutes consciously breathing sends balance signals to our brain, telling it that everything is fine, and moves us out of the part of our brain that causes us to feel overwhelmed and into a state of calm. Instead of being hampered by anxiety, distraction, or excessive stress, resonant breathing can help.

The concept of the Breathing app is inspired by resonance, a scientific term that describes what happens when our heart rate, heart rate variability, blood pressure, and brainwave function all come together in a coherent frequency. It happens on its own when we breathe at a rate of one to seven minutes.

The effects of resonance support our body’s, nervous system’s, and emotions’ innate ability to heal themselves by balancing the complementary branches of our autonomic nervous system, which control our heart rate, blood pressure, digestion, respiration, and many other automatic functions.