5 Common Mistakes You Must Avoid During Flutter App Development!

How can one avoid mistakes during Flutter App Development 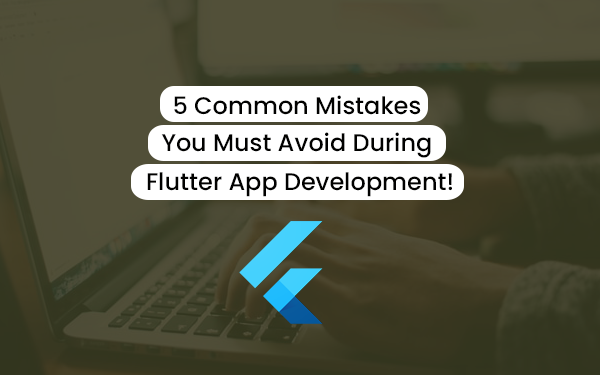 Flutter today is running on almost every other platform! As of now, the amazing framework supports five different platforms – iOS, Android, Linux, macOS, Windows and Web. This makes a lot of developers begin their software development voyage with Flutter Mobile App.

Here, we are going to reveal the common mistakes that Flutter developers at the beginners level tend to make now and there. In case you happen to be already committing any of the following mistakes, we really hope that you stay clear of it after your initial learning phase gets over. We all make such mistakes during our learning period and remember that we all are still learning… So, let’s begin!

Before You Begin to Learn Flutter and Dart

If you are a beginner, it’s definitely not a good approach to ignore native development. Rather, you should begin with Swift, Java/Kotlin or some other native language and carve your way up to building native apps for your preferred platform. Learning to structure data along with several other platform-oriented things would really benefit you in the long run.

Let’s understand this in detail.

Let us assume you wish to build a complex AppBar along with a Drawer menu as well as other few components. When it comes to native Android development, you will be required to face more complicated scenarios and have to manage more codes for correct functioning.

Here, you will have to make your way up by facing a number of problems and by solving all these problems as well. This will help you a lot to learn new ways so as to manage App components.

In Flutter Mobile App Development, it just takes a few lines of code in order to complete the same thing!

Though it is amazing when you are just beginning to learn development, you must focus on your skills instead of just getting things done by hook or crook. You must learn the fundamentals of software development in languages such as Java or Kotlin. This way, you will appreciate the great frameworks like Flutter much more.

Do NOT Make Excessive Use of Dart Variable

Since many developers do this, we consider this one as the top mistake when it comes to Flutter mobile app development!

Making Use of Dart Variable Even When They Aren’t Required!!

Avoid using of as well as declaring top libraries. Instead, make use of underscores as your file name in order to prevent any directories from altering yours.

Do NOT Rely On Too Many Resources

Most often than not, Flutter App Developers commit this mistake as they wish to understand what actually they can do about the content available on the internet.

However, developers must realize the fact that not every other resource is reliable or provides authentic or quality information. Some can even be so hazardous that they can lead you down a track that isn’t worth spending time on.

Know that there are only a few websites that provide genuine posts and tutorials on Flutter App Development.

Do Adapt to Latest Trends

As we deeply look back, a number of progressive mobile apps that used to be on the top went down for one major reason – they completely failed to implement new updates!

When they made efforts on including new functionalities, they witnessed detrimental effects.

Such an issue also extends to the Flutter Mobile App Development process. If you fail to test new strategies, then succeeding in such a demanding industry would become hell difficult!

Though it can prove to be tough in the emerging industry, keep yourself well-updated with the latest libraries and enhancements.

When you move into a well-developed environment, you feel your abilities and talents becoming obsolete. Thus, it is extremely critical to maintain consistency when it comes to programming practices.

Furthermore, make use of the most up-to-date technological enhancements, implementations as well as libraries.

Flutter is an incredible tool to build smartphone apps. One minor blunder in any kind of programming project lands you with major problems! In order to stop making errors in your Flutter mobile app, make sure to follow the below-mentioned tips:

Finally, DO NOT Forget to Check The Debug Console

Let’s assume that you have completed the code and all is working absolutely fine. However, never forget to check the debug console and the Logcat. In Flutter mobile app development, you would not be able to notice the rebuilds occurring in the background unless and until you look at the debug console.

Though it is not that significant, it can result in unintended app closes and crashes in the long run.

There is n number of reasons why the developer community prefers Flutter development services. Quick loading and fabulous UI/UX experience are a few.

As a result of this, many developers today are turning to Flutter so as to build large-scale applications. They also often make some of the other errors mentioned above that appear insignificant but have the potential to bring a major impact on the success of an application.

Hope this post was helpful enough for you to avoid such mistakes whenever you come across them in an instant and make you have a wonderful Flutter journey!

Priyanka Sharma is who loves to pen down her knowledge and understanding in an engaging and most simplified manner. She is a keen learner, an early adopter and likes to stay well updated with the latest technologies and recent trends in the app development industry. She has an overall 7 years of experience and has a knack for expressing solid facts in place of indistinct information in a creative way. She has acquired talent for writing on challenging topics from in-depth research and incredible guidance. Sole purpose of her writings is to provide readers with interesting information which they find easy to grasp and utilize.