Electra raises €15 million to revolutionize the charging of electric cars

Electra is a French firm that is developing a network of ultra-fast charging stations for electric vehicles. 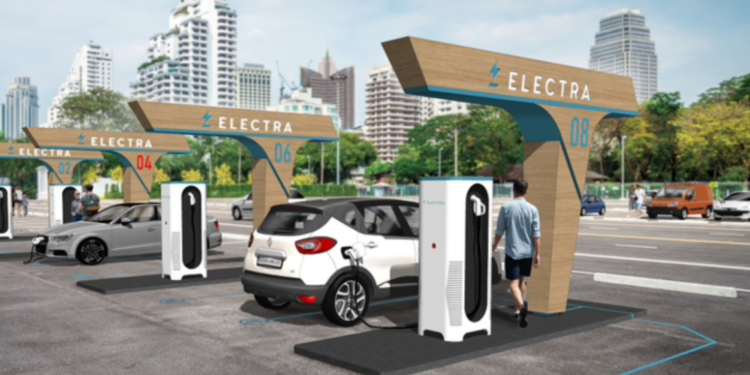 Electra, a network of ultra-fast e-charging stations, announced that it has raised €15 million in seed funding from its investors, the largest seed round in France so far this year. Its goal is to facilitate the transition to electric mobility by tackling recharging, with a network of 1,000 ultra-fast charging stations anticipated by 2030.

Electra was founded in 2021 and has 15 workers in Paris, plans to deliver the first batch of 50 ultra-fast charging stations within a year. It was developed to address a major issue that is also a source of concern for many new users: charging electric automobiles. The experience must be easy and intuitive, but most importantly, it must be tailored to the evolving market and automobiles that support progressively fast recharging speeds. In fact, according to the firm, charging an electric automobile in 2030 will be nearly as rapid as refueling one now.

Electra has made a name for itself in the booming electric vehicle sector by focusing on the stations. According to AVERE, 68 percent of electric vehicle owners are dissatisfied with the stations, primarily due to a lack of outlets in France and their insufficient power (National Association for the Development of Electric Mobility). To address this, it has designed quick charging stations that take no more than 15 to 30 minutes and are simple to use, which it plans to deploy primarily in Ile-de-France, Lyon, and Lille.

As Aurélien de Meaux, CEO, and co-founder of Electra, says, the health crisis has heightened awareness of the need for sustainable and accessible solutions. “During the first lockdown in 2020, we observed that we lived in calmer and cleaner cities,” he says. We like the thought that, in 20 years, our cities will breathe and we will have a serene quality of life owing to electric mobility. It’s only a matter of time before everything becomes electric, from two wheels to the car, becomes a reality. Even financial concerns will be alleviated, as electric car prices are predicted to drop by 50% in the next 5-6 years. It will no longer be a luxury to travel in a clean environment.”

Charging stations from Electra are already being installed in towns and cities around France. Shopping malls and supermarkets, hotels, and parking companies are among the deployment sites, with a goal of more than 50 sites signing up by the end of the summer. Users are attracted to the potential of being able to eat or snack while recharging, for example, as part of a continuous experience.

In order to expedite the adoption of electric vehicles in the country, the Parisian startup wants to deploy 50 stations in the country within a year and 1000 stations by 2030. “With our network of stations, users will always be less than 10 minutes away from a station and will be able to recharge quickly due to on-demand reservation,” says Aurélien de Meaux. Serena Capital, for example, was enticed by this promise.

“One of the biggest problems of the twenty-first century is decarbonizing the automotive market,” says Xavier Lorphelin, Managing Partner at Serena. “By 2020, the French electric car market will have grown by 180 percent, despite a 25 percent reduction in the overall energy market. This expansion appears to be unprecedented, yet it is impeded by a lack of infrastructure.

Electra’s goal is to eliminate all barriers to electric vehicle adoption by creating the most efficient network of ultra-fast charging stations in France. The firm, which currently employs 15 employees, plans to invest in R&D and double its personnel by the end of the year.

Longenesis gets €1 million to accelerate the digitization of biomedical research