The new MacBook Air 2022 features a redesigned design with a bigger 13.6-inch notched display and some excellent quality-of-life improvements including MagSafe charging and a new 1080p camera. 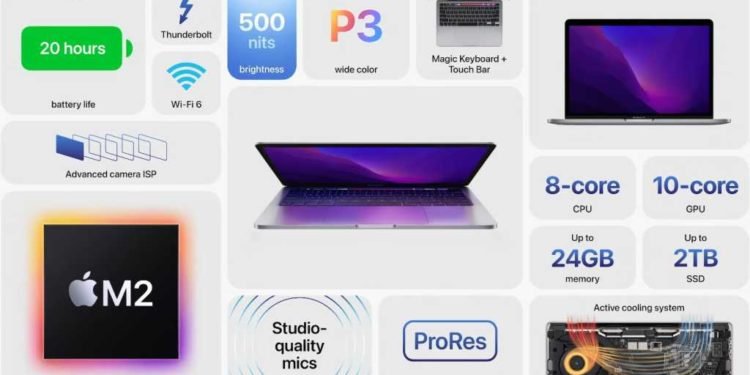 The new MacBook Air 2022 features a redesigned design with a bigger 13.6-inch notched display and some excellent quality-of-life improvements including MagSafe charging and a new 1080p camera. The 13-inch MacBook Pro, on the other hand, is essentially the same laptop like the 2020 model, replete with a Touch Bar, although both include Apple’s new M2 chip. So, how do they stack up against the MacBook Pros that shook our geeky worlds last year with the M1 Pro and M1 Max CPUs and the return of a slew of ports?

First and foremost, due to a slimmer, non-wedge design and somewhat more colorful alternatives, the MacBook Air looks new. It’ll come in silver, grey, starlight, and a dark blue-ish “midnight” color scheme, with an eight-core M2 CPU, eight GPU cores, 256GB of storage, and 8GB of RAM as standard. It also has a new 1080p webcam (no longer 720p), as well as lower bezels. Despite this, the screen size has been expanded to 13.6 inches, with a better resolution of 2560 x 1664 pixels. The base model Air will cost $1,199 when it releases in July, which is more expensive than the 2020 version (which will remain at $999).

The 13-inch MacBook Pro is receiving an upgrade on the inside, but it’s still sporting some outmoded hardware choices. It has the same eight-core M2 CPU and 10 GPU cores as the new Air, but it also has a fan for longer operation under greater loads, similar to the 2020 MacBook Pro model. Unfortunately, it has many of the same features as its 2020 predecessor, including the same screen and chassis, the same two-port choices, no MagSafe, and the Touch Bar.

The fact that this MacBook Pro is remaining around with an antiquated design and input method that’s all but phased out seems unusual, but it’ll start at $1,299 when it also comes in July. Fans of the Touch Bar must be ecstatic, right?

We’ll have to wait for our complete evaluation of the new MacBook Air and 13-inch MacBook Pro to see how they stack up against the 14-inch and 16-inch MacBook Pro computers, but in the meanwhile, here’s a spec-by-spec comparison.

While competing with these behemoth Pro machines will be difficult, the 2022 MacBook Air shows promise with these good quality-of-life enhancements. Of course, the 14- and 16-inch MacBook Pros feature an SD card slot, whereas the new Air and 13-inch Pro do not. But it would have made it thicker than the 13-inch Pro’s already slim 11mm, and if Apple chose to do so, it may make the 13-inch Pro even more unappealing in comparison.

When these new MacBooks are released next month, the MacBook landscape will undoubtedly change. What specifications of a MacBook Air or Pro appear to be a good fit for you?