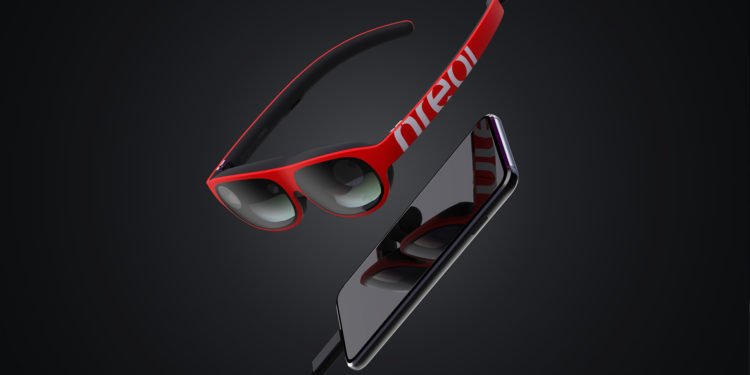 Nreal, an augmented reality firm, is releasing a less expensive, iOS-compatible, and more compact version of its smart glasses. The new Nreal Air glasses are expected to be available in Japan, China, and South Korea beginning in December 2021. The price has not been established, but Nreal claims they will be “a quarter of the price” of its previous Nreal Light spectacles, which began retailing for approximately $600 last year.

According to Nreal’s description, the new Nreal Air glasses have certain fundamental characteristics with the Nreal Light glasses from 2020. Both are meant to appear like ordinary sunglasses and are marketed as being perfect for displaying a virtual big-screen display in front of your eyes. They both have augmented reality optics that use tiny OLED screens and are powered by a phone through a tether wire. And neither is directed at companies, researchers, or the military.

Nreal was created in 2017 with the goal of creating consumer-facing Mixed Reality (MR) user experiences all over the world. The Nreal Light MR glasses are lightweight, comfortable, and have a broad Field of View (FoV). Nreal Light was widely praised for its wearability and digital interactivity when it was first presented at the 2019 Consumer Electronics Show (CES) in Las Vegas. Nreal received Engadget’s “Best of CES Award,” becoming the first Chinese firm to do so since the award’s debut.

However, Nreal Air glasses vary from their predecessors in terms of feature set. The initial Nreal Light spectacles, similar to Microsoft HoloLens or Magic Leap technology, could map physical space around you using a set of outward-facing cameras. Nreal Air glasses, on the other hand, lack any outward-facing cameras. They can show video and phone applications, but they can’t see what’s around them, thus they lack the spatial awareness and hand tracking capabilities of the Nreal Light. You’ll operate them with a smartphone app, which is also an option for Light glasses.

On the plus side, Nreal Air glasses are, strangely, significantly lighter than Light glasses, weighing 77 grams as opposed to 106 grams. They don’t have the somewhat bug-eyed appearance of Light glasses; instead, they resemble Facebook and Ray-smart Ban’s glasses, without the front-facing cameras. (The Ray-Ban Stories glasses, which feature cameras but no augmented reality display, weigh about 50 grams.)

The new glasses allow users to tilt the lenses at three different positions, possibly making it simpler for more individuals to obtain a sharper view. Nreal Light glasses were initially designed to operate with particular 5G Android phones, but the updated glasses will also work when connected to iPhones and iPads, as well as “most” Android smartphones.

The Nreal Air glasses offer a greater screen refresh rate of 90Hz and a higher pixel density of 49 PPD as compared to the Light. According to Nreal, the field of view of the glasses is 46 degrees, compared to 52 degrees for the Nreal Light — this corresponds to the Air’s view being equivalent to a 130-inch screen from 3 meters away or a 201-inch screen from 6 meters. If users have friends who also have Nreal glasses, they may host a viewing party, which converts the screen into a shared virtual theatre where they can all watch the same video.

Nreal wants to increase the Air glasses’ deployment in 2022, and a spokeswoman says the US is a “big market” for the business, though no plans to ship there have been revealed. It will offer the glasses in collaboration with major phone carriers, as it did with the Light; it hasn’t announced particular partners, but it has previously collaborated with Germany’s Deutsche Telekom, Korea’s LG Uplus, and Japan’s KDDI.

According to a Nreal representative, the Air was created when the firm realized that most users were primarily utilizing the glasses to view the streaming video (and to a lesser extent, surf the web) or to build apps for the platform. In Korea, around 78 percent of users used glasses to watch streaming material. “Consumers nowadays are demanding lighter, but longer-lasting AR glasses specifically for streaming media and working from home,” said Chi Xu, the company’s creator, in a statement. According to Nreal, the lack of cameras is also intended to convince spectators that the glasses would not intrude on their privacy.