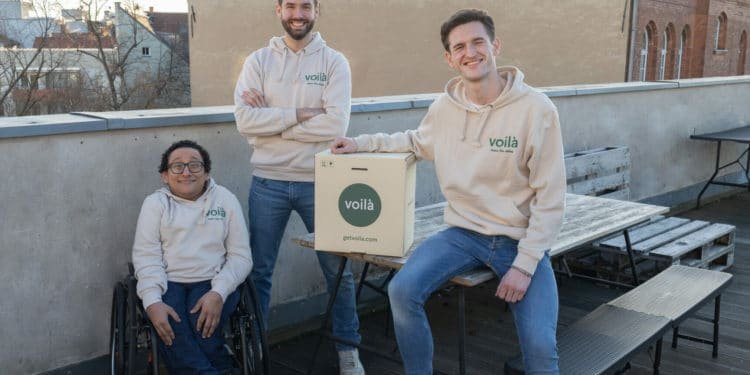 voilà was founded in May 2021 by Julius Wiesenhütter (CEO) and close friends Florian Berg (COO) and Mostafa Nageeb (CPO) following a series of trial deliveries from Paris to Germany. The team, which previously worked with European food tech heavyweights such as Delivery Hero and Foodpanda, uses their industry knowledge to provide a high-quality restaurant experience to customers’ homes in record time.

Julius Wiesenhütter, co-founder and CEO, stated that they began with the goal of bringing the most excellent restaurants, most known chefs, and tastemakers to food enthusiasts around Europe. At voilà, they are not attempting to replace dining out; instead, they are pioneering a new category of food delivery: home exquisite dining.

Food delivery is exploding, having more than quadrupled in size since 2017. Food delivery is not a new habit in Europe – we all recall the days of calling restaurants for weekend pleasure. However, mainly due to the pandemic, food delivery has developed into a sector that embodies the next generation of European technology and creativity, and the business has rapidly digitalized.

Simultaneously, as remote and hybrid work became more prevalent last year, large swaths of European IT professionals abandoned their urban residences for a more rural lifestyle. In May 2021, demand for rural housing grew by 50% in Germany alone, compared to the same month in 2020. At the same time, individuals used to exceptional meals at city center restaurants don’t want to lose out on such experiences and desire variety that their home cooking cannot continually supply – enter voilà.

Along with operations, voilà develops digital experiences to complement the cuisine, such as a QR code that leads to a chef-curated song to accompany the meal, immersing consumers in the chef’s and restaurant’s world. Additionally, voilà leverages technology to optimize orders by developing new data-driven efficiencies. This frees cooks to focus on their passion: producing unique gourmet experiences.

Jenny Dreier, Venture Lead at EQT Ventures, adds that voilà has already aided independent restaurants in expanding their reach beyond lockdowns, helping them deliver their distinctive menus to a national audience, enhance sales, and build brand awareness over time. voilà, can expand on these accomplishments with this new investment round by taking a daring cross-border strategy. The next several years will see a sea change in the market for in-home restaurant experiences. This is only the beginning, and we are proud supporters of the voilà team, who are genuine pioneers in the sector.