Whatsapp Made a Movie With Giannis Antetokounmpo

Twitter users were left perplexed when WhatsApp announced it made an adaptation movie of the real-life story of basketball player Giannis. 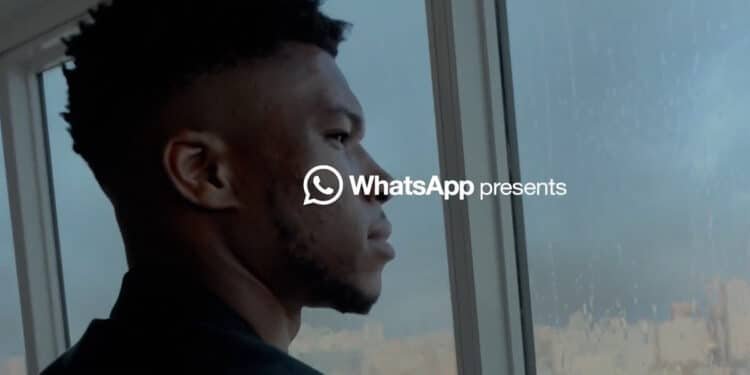 Meta’s WhatsApp has launched a teaser for Naija Odyssey, a new short film on NBA player Giannis Antetokounmpo. According to Variety, the film is a short (12-minute) documentary on Antetokounmpo’s life.

Given that Antetokounmpo inked an endorsement contract with WhatsApp in February, making him the social media platform’s first brand spokesman, the video looks to be effectively promoted material. While this isn’t the same as Apple’s foray into film and television with projects like Coda and Ted Lasso, Naija Odyssey might be an indication that WhatsApp is looking into original material in some capacity — even if it’s only for future branding chances.

“The actual story of Giannis Antetokounmpo, a basketball player born in Greece to Nigerian parents.” People had attempted to tell him who he was his whole life. Giannis now shares his ‘origin tale of many beginnings,’ reconciling his roots, birthplace, and sense of belonging between cross-cultural realms.”

While the Naija Odyssey video indicates that the film will be launched on Amazon Prime Video on September 21st, Variety claims that WhatsApp will also broadcast the film on its social media platforms and on YouTube.

The Greek basketball sensation returns to his beginnings in Greece in the short film Naija Odyssey. While it doesn’t show much, the teaser suggests a hybrid of a journey and a narrated memoir.

Giannis Antetokounmpo is now one of the top players in the NBA. He’s a multimillionaire who has gained worldwide success as a result of his exceptional basketball abilities and modesty. Last season, the former NBA champion and Defensive Player of the Year averaged 29.9 points, 11.6 rebounds, and 5.8 assists.

Fortunately, that period of his life has come to an end. However, NBA fans will be able to see this video and learn about Giannis Antetokounmpo’s heartwarming and remarkable life story.

Take a look at some of the information you need to know about Giannis’ “Naija Odyssey,” which will be released on September 21.

Antetokounmpo, the son of Nigerian parents, was born in Greece. Giannis, like many NBA players, struggled a lot as a kid. He was awarded the 2021 NBA All-Star MVP and led the Milwaukee Bucks to the NBA Finals that year, despite his parents’ struggles to pay for him and his four siblings. According to WhatsApp’s description, the pro basketballer “tells his origin tale of various beginnings as he reconciles his roots, birthplace, and feeling of belonging between cross-cultural cultures” in the 12-minute clip named “Naija Odyssey.” In February of this year, the athlete signed an endorsement contract with WhatsApp.

“Naija Odyssey,” narrated by Antetokounmpo and his mother, Veronica, is largely modelled on the famous Greek epic poem “The Odyssey,” portraying various milestones in his life. “In Greece, my professors heard legends of travellers fighting the sea to find their way home — to discover themselves,” Antetokounmpo says in the trailer’s voiceover (watch below). “I was on the same path.”

Nono Ayuso and Rodrigo Inada directed “Naija Odyssey,” which was edited by Mikkel E.G. Nielsen, who won the 2021 Academy Award for film editing for Amazon Studios’ “Sound of Metal.” WhatsApp will broadcast the video on its social media outlets, YouTube, and Amazon Prime Video on September 21.

What prompted WhatsApp to commission the film?

The idea is essentially a piece of sponsored material designed to profit from Antetokounmpo’s global renown and convey the concept that WhatsApp can bring people together. “‘Naija Odyssey’ is a narrative that underscores how WhatsApp lets us accept our various lives,” said WhatsApp’s global head of marketing, Vivian Odior. “WhatsApp is there to help you navigate relationships, identity, and even hardship, allowing you to embrace all parts of yourself by connecting you to people who mean most.”

The optimistic message of “Naija Odyssey” appears to be intended in part to counter the perception that WhatsApp has aided in the dissemination of disinformation and exacerbated societal differences, leading to real-world bloodshed in certain situations.

The journey of Giannis Antetokounmpo is recounted in ‘Naija Odyssey.’

Giannis Antetokounmpo has deep links to both Greece and Nigeria while living in the United States. While he was born in Greece, his parents lived most of their lives in Africa.

“Naija Odyssey” is a short film on the Bucks superstar’s life. The Greek Freak discusses all he has gone through to get to where he is now.

“Naija Odyssey” is an excellent title for a Giannis film. The term “Naija” refers to Nigeria and its people. Odyssey is Greek poetry about Odysseus, a Greek hero who encountered many difficulties on his journey home. Antetokounmpo, like Odysseus, endured several obstacles as a child.

On Wednesday, September 21, the film will be accessible on Amazon Prime Video.

Antetokounmpo had nowhere to go

Giannis was born in Greece but did not earn Greek citizenship. He, too, was not a Nigerian citizen, so he had nowhere to go. He was left stateless since he lacked documentation from any nation.

Thankfully, Greece granted him citizenship in May 2013, only two months before the NBA Draft. Giannis Antetokounmpo was the 15th overall choice in the draught, and he quickly rose to become one of the top players in the NBA.