Titan, an email business established by Bhavin Turakhia, already has over 100,000 members, over 70% of whom are paying users. 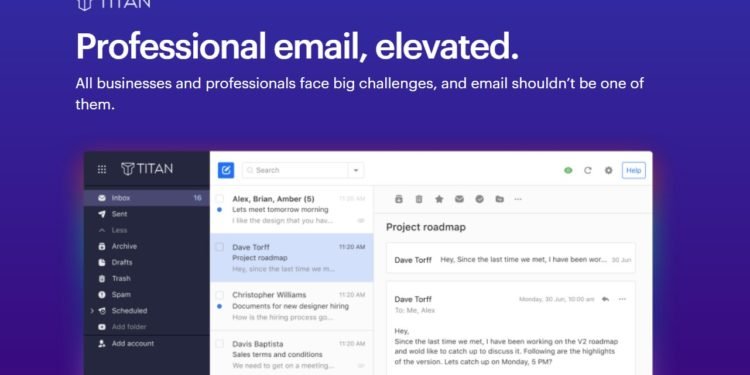 Titan Email has secured $30 million in financing from Automattic, the parent company of WordPress. This is Automattic’s largest single investment in a startup. Titan’s valuation increased to $300 million as a result of this financing. The startup is owned and operated by Nova Group, which also owns and manages Flock.

“We are delighted to make our largest strategic investment to date in Titan, and we are working to integrate it fully on WordPress as a tool to help clients establish a professional brand online,” stated Matt Mullenweg, Founder, and CEO of Automattic. We believe in Titan’s ability to build a world-class suite of productivity tools with an in-dashboard, personalized user experience that offers users and partners ownership and control over their personal data.”

Titan’s next-generation email suite for enterprises seeks to disrupt the email market. Titan claims to have over 100,000 customers, over 70% of whom are paying users and is only available to users through agreements with prominent Web Presence Providers such as WordPress.com. Titan, according to Bhavin, has been in the works for almost a year.

“The notion of Titan stemmed from my personal dissatisfaction,” he stated. I am a heavy email user. Even today, I notice that emails are used for the great majority of corporate conversations throughout the world. It is a widely utilized platform that is not used by a single firm. It is also a significant communication tool, with almost 400 million small websites worldwide, 40 million new websites established each year, and a billion and a half commercial accounts.”

Nonetheless, he claims that the “great majority of corporate email continues to use the same interface and features” as a personal mail program. “Business emails must be distinct,” Bhavin says. The features of Titan are intended to bring companies closer to their consumers. Users can, for example, utilize Titan’s Scheduled Send to send fresh emails when they are most likely to be viewed.

Businesses may also use Follow-Up Reminders to ensure that they are persistent when following up on leads. Titan also comes with Email Templates, which allow users to rapidly send out fresh emails and recurring answers without having to start from zero.

While Bhavin said that the industry is crowded, Titan’s unique selling point is that it was designed with corporate needs in mind. “At the moment, the suite isn’t stand-alone; it works in tandem with our partners and our business development team,” Bhavin noted.

He stated that email has been a fairly general program up to this point. “Everyone has a phone, but none are designed particularly for business workers. The product would be different if you thought about it that way.” The team now hopes to reach over a million customers worldwide.

Bhavin, a serial entrepreneur, and millionaire, is driven by a desire to solve problems through technological solutions. He has established five successful firms in the previous 22 years, all inspired by his view that “it is our moral responsibility to have an effect that is commensurate with our potential.” At the age of 17, he co-founded Resellerclub, LogicBoxes, and BigRock, which he sold for $160 million in 2014. Along with Nova, he currently leads Radix, a prominent registry for top-level extensions, and Zeta, a next-generation platform for banks, fintech, and distributors.

After co-founding Directi with his brother Divyank Turakhia in 1998, the two departed the company in 2014 in a $160 million deal with Endurance (now Newfold Digital). Bhavin later founded Radix, a prominent internet domain registry, and Zeta, an emerging leader in contemporary banking for consumers all over the world.