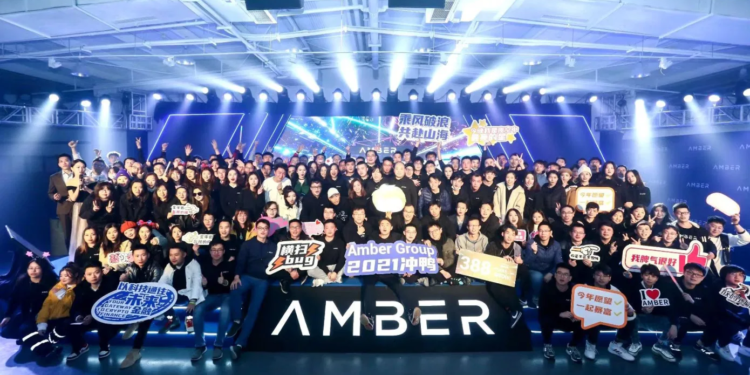 According to the company, it now has $1bn in assets under management and is profitable. But those values can sway depending on current crypto prices.

“We’ve had record months over the past quarter across both client flow and on-exchange market-making volumes,” chief executive Michael Wu said in a statement. More mainstream venture capital firms are jumping on the crypto bandwagon as investors increasingly consider bitcoin an investable asset, despite the recent massive price drops of a few major cryptocurrencies.

The latest valuation is 10 times that of the company’s Series A closed in 2019, a $28 million round that counted Coinbase Ventures as one of its investors. Also notably, Amber’s Series B financing was bankrolled by a list of high-profile financial and VC firms, including China Renaissance, which led the round, and Tiger Brokers, Tiger Global Management, Arena Holdings, Tru Arrow Partners, Sky9 Capital, DCM Ventures, and Gobi Partners.

“Many of the new investors which came in this round provide great breadth in terms of perspective, having seen many high-growth companies in fast-evolving industries go from 0 to 1, and 1 to 100,” Amber’s co-founder and CEO Michael Wu told TechCrunch.

“From an employer branding perspective, we are trying to attract global talents, and many of those are potentially new to crypto. For them, seeing these more traditional and familiar names backing Amber helps make them more interested in joining Amber potentially.”

Founded by a group of former investment bankers in their twenties, Amber initially set out to apply machine learning algorithms to quantitative trading but pivoted in 2017 to crypto when the team saw spikes in virtual currency’s trading volumes. The startup now serves both institutional and individual investors, offering them algorithmic trading, electronic market-making, high-frequency trading, OTC trading, borrowing and lending, and derivatives, among other products.

The firm launched its mobile app in the third quarter of 2020, widening its scope from institutional clients to retail consumers. More than 700 institutional customers — mainly large hedge funds, family offices, and corporations — account for over 70% of its revenues, though its consumer-facing app has grown substantially, with over 100,000 registered users as of late.

Amber has been profitable since its inception, according to Wu, with annualized revenues of $500 million based on figures from January to April 2021.

The startup’s business hasn’t been dampened by the recent slump in prices. Rather, its revenues from the second quarter were at an all-time record and tripling that of Q1, said Wu.

“Whilst the drop in prices means that our AUM [assets under management] measured in dollar terms decline, in terms of the number of coins for BTC, ETH and stablecoins, they are all still growing healthily. Meanwhile, our trading business is also still flourishing with the uptick in volatility.”

The startup now accounts for 2-3% of total trading volumes in major spot and derivative markets, the founder said. Its cumulative trading volumes have doubled from $250 billion since the beginning of the year to over $500 billion. Altogether, Amble manages around $1.5 billion in trading capital that varies based on BTC and ETH prices.

The firm now has more than 330 employees worldwide across Hong Kong, Taipei, Seoul, and Vancouver. The proceeds from its Series B will go toward aggressive hiring across all fronts, from quantitative research, software development, and compliance to business development. It also plans to tap marketers and distribution channels for user acquisition, as well as work on clearing regulatory hurdles in more jurisdictions.

Critics have long been wary of the crypto industry’s environmental costs. On this issue, Wu countered that “Amber is not engaged in proof-of-work mining, yet.” He’s also optimistic about where the field is headed.

“Based on available data, over 40% of bitcoin mining is already from renewable resources. Based on trends we see with our mining clients and partners, we believe that this number will continue to go up.”

“Since stepping up our on-screen presence, we now account for 2pc to 3pc of total trading volumes in major spot and derivative markets and are continuing to see growth. Our cumulative trading volumes have doubled from $250bn since the beginning of the year to over $500bn.”

While headquartered in Hong Kong, the company also has a presence in Taipei, Seoul, and Vancouver. It plans to invest the funds in further internationalization. Wu told CNBC that the company would be pursuing acquisitions to obtain talent as well as regulatory clearances in other markets.

Amber raised $28m in a Series A round last year and this Series B investment marks another significant funding round in a crypto firm led by traditional investors. Tiger Global, which participated in this round, has been particularly active in the space of late, leading a $250m round in Mexican cryptocurrency exchange Bitso as well as investments in India’s CoinSwitch Kuber and crypto-asset manager Babel. Coinbase’s recent IPO was a watershed moment for crypto in the mainstream, while PayPal has doubled down heavily on crypto services.

About the fundraise, Wu says, “is more about crypto finance being a fast-evolving industry that offers the opportunity for a startup like Amber to go from zero to a billion and beyond in a very short period of time and also offers the opportunity for guys like ourselves who are long term to perform in bull and bear markets across different cycles. And so to me it’s just the beginning.”

Wickr Me App Review: An excellent way to connect with friends