Mohan Lakhamraju established Great Learning in 2013 with the goal of creating an inclusive higher education and upskilling platform. 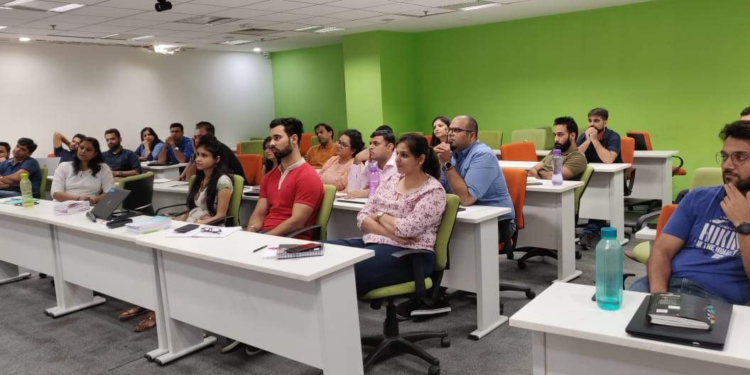 Mohan Lakhamraju’s career in education began in 2006 when he was the India MD of Tiger Global. During his tenure, he not only established the New York-based VC’s Mumbai office but also managed the firm’s investments in education firms throughout India and South Asia.

“At the time, the industry was in disarray. Learning outcomes were not being achieved. People were unable to apply what they had learned to further their careers, he claims.

Mohan wished to address the issue of learning outcomes first offline, then online. He founded the Great Lakes Institute of Management, one of India’s finest business schools, in Chennai in 2011 and continues to serve as its Vice-Chairman.

When Coursera began to gain momentum in the United States in 2012, Mohan shifted his focus to online education. He quickly realized that India was not like the rest of the world’s markets. “In the United States, it is all product-to-product; there is no mentorship.

However, just putting information online as MOOCs (Massive Open Online Courses) was not going to work in India. “It was necessary to concentrate on application-oriented learning,” he explains.

Great Learning was founded in 2013 by Mohan as higher education and upskilling platform focusing on offering high-quality, outcome-driven, and mentor-based learning. The Gurugram-based firm started its first program in business analytics, which was in high demand at the time. It honed emphasis on mid-career professionals who “could study without having to quit their employment and still have a transformational learning experience.”

“These were generally folks who had been in their professions for 4-5 years and understood what they wanted to do next,” Mohan adds. Later, the site launched online boot camps for freshers as well as job-finding solutions. “We wanted to create an inclusive learning platform.” Because excellent offline institutions have always been exclusive,” the founder continues.

Great Learning is now one of India’s top three higher-education businesses, after seven years, 60 million hours of learning, 1.5 million students, and a $100 million ARR. It competes with domestic rivals such as upGrad and Simplilearn, as well as foreign players such as Udemy, Coursera, edX, Degreed, and MasterClass.

Mohan explains, “We collaborated with these universities because they have the greatest teachers.” Learning is not a transactional activity; it is a higher-order activity. Teachers are also essential for truly robust learning to occur. People value hand-holding and support, which is now being verified across geographies.”

Data science, business analytics, AI, ML, cloud computing, software development, cybersecurity, design thinking, and digital marketing are among the subjects covered by the platform’s degree, diploma, and certificate programs. There are over 330 free courses to select from, as well as 45 premium mentoring programs.

Today, foreign learners from 85 countries account for over 40% of Great Learning’s business. Prior to the pandemic, this figure stood around 20%. International students on the platform also complete courses at a higher rate of 96 percent, compared to the platform’s average of 91 percent.

It offers free courses in 170 markets. The platform is gaining popularity in the United States, the European Union, Australia, and portions of Asia. “Every hour, feedback on courses is collected. In seven years, our average rating has been 4.5,” adds the entrepreneur.

Great Learning monitors and assesses placements because it solves for outcome-oriented learning and helps students acquire competencies for career development. According to the firm, 66 percent of its students have had a “career shift” within a year of finishing their course.

“We have over 500 hiring partners that help us find people. Throughout the epidemic, we have observed more than 100 placements each month. “The digital economy is driving the majority of demand,” Mohan explains.

Great Learning only offered paid courses till April 2020. However, with the pandemic lockdowns causing a surge in online learning and a surge in demand for upskilling courses, it launched a free course library (Great Learning Academy). This resulted in a significant increase in monthly users on the platform.

“We had around 100,000 users before the pandemic,” Mohan says. In the previous 15 months, there has been a tenfold increase. The epidemic also compelled authorities to take action. We anticipate massive growth now that the government has legitimized online degree programs [as part of NEP 2020]. We will have two million students by September.”

App-based learners account for nearly two-thirds of its users. Great Learning anticipates its overall user base to exceed 15 million by 2025, with paid learners reaching half a million.

“The online learning habit will persist. Several universities have agreed that up to 40% of on-campus instruction can be mixed with online learning. But how many institutions are in a good position to do so? Several of them will have to approach us in order for us to assist them,” explains the founder.

Mohan says, “Our largest growth driver has been the acceptance of online learning, combined with going worldwide and legitimizing online degrees.” We believe that $100 million ARR is a remarkable achievement, and doing it at an Indian price point has been difficult.”

“Olympus is a fully functional online university. It is the engine that drives our global operations. After receiving several requests from professors, we introduced it in July of last year. Over 250 institutions are currently utilizing it, but we haven’t monetized it yet,” says the creator.

Great Learning is underfunded, despite the fact that the edtech market is awash in venture money. “We never intended to raise money just for the sake of raising money. We are constantly on the lookout for the proper sort of money. We raised an undisclosed amount of money, but we wanted it to be a non-event,” adds the entrepreneur.

Surprisingly, the firm is believed to have had merger negotiations with BYJU’S, India’s most valued startup, which has been on an acquisition binge in the previous 12-15 months. According to reports, the latter has made a $350 million buyout offer to Great Learning.

Mohan responds, without confirming or rejecting the news, “We have had many talks both as an acquirer and as an acquiree.” The market will [eventually] achieve efficiency. This insane level of competitiveness cannot endure. Online education has several expenses and functions that are duplicated. Consolidation has the advantage of eliminating these duplications.”

Even while Great Learning has remained low on the financing radar, it made a lot of news last September when it signed India’s cricket captain Virat Kohli as a brand ambassador.

“We don’t spend as much money on marketing as our competitors. As a result, we needed to do something to raise public awareness of the epidemic. With the addition of Virat Kohli, it became a reality. “Our brand engagement and traction increased dramatically,” Mohan adds. Earlier this year, it was announced that it was aiming to raise $60 million to expand its worldwide talent acquisition, content creation, and growth initiatives.

According to RedSeer research, the online higher education industry in India is predicted to increase 10X to $5 billion by 2025. The market is already controlled by 2-3 players who are considerably larger than the rest of the players combined.

“There used to be 40-odd firms, but they haven’t expanded. The market is already quite consolidated. And there will be further consolidation,” Mohan predicts. There is little doubt that edtech is undergoing a change, unlike any other industry. According to Great Learning, education is the only remaining industry (apart from healthcare) that will be affected by technology.