What is Heavens-Above App?

Heavens-Above is a non-profit website that Chris Peat founded and managed under the name Heavens-Above GmbH. The program is designed to help people observe and track satellites orbiting the Earth without using optical equipment like binoculars or telescopes. It creates detailed star charts that show the satellites’ trajectory against a background of stars as seen during a pass.

The International Space Station, Starlink satellites, and other spacecraft are given special attention. Space shuttle flights were followed until the program was terminated in July 2011, and Iridium flares were tracked until the program was released in May 2018. The website also contains data on observable comets, asteroids, planet features, and other interesting facts. 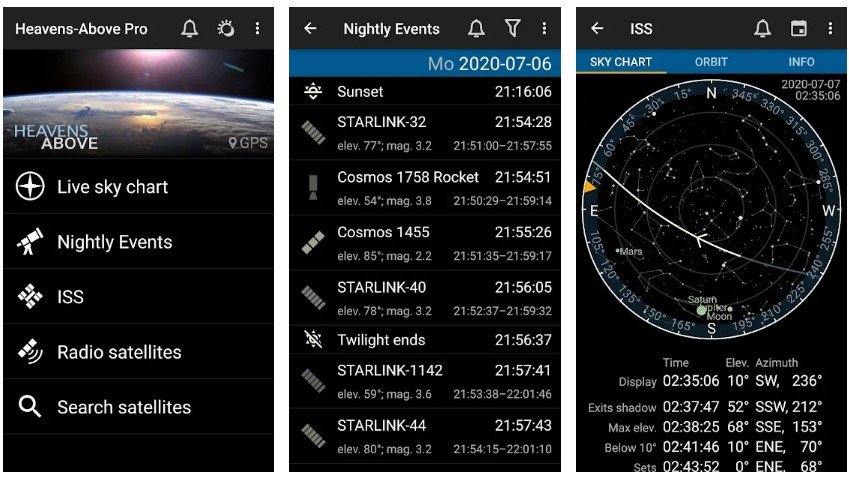 Unlike many other astronomy/star-mapping apps, Heavens Above’s interface is designed with satellite and iridium-flare tracking in mind. The resulting design is relatively simple: live sky chart, nightly events, ISS, and Iridium Flares sections make up most of the app’s content. Each of these options is accessible via the simple main menu, studded in black with white text.

The simple, primarily monochrome color scheme contrasts nicely with a close-angle photograph of the top section of Earth from outer space, with the bottom right-hand corner of the picture overlaid with a simple textual reminder of the app’s GPS-based capabilities, as well as the small cog icon giving you access to the ad settings.

The red marker indicates your present location. You can alter the background by doing one of the following:

Drag the viewpoint with the mouse while holding down the left mouse button.

You may zoom in and out of the ISS by using the mouse wheel.

Press the button at the bottom right of the screen to enter fullscreen mode.

Satellites can only be seen when the sun shines on them, and the observer on the ground is already in the dark. These criteria are only met when the sun is below the observer’s horizon but not so low that the satellites themselves are in the earth’s shadow.

As a result, satellites are usually only visible a few hours after sunset or before sunrise. In the middle of the night, the sun is simply too low on the horizon to illuminate them. However, the sun rarely sets too low in summer, especially in extreme northern or southern latitudes, and satellites can be seen all night.

Select “Black on white” at the bottom of the page, then click the Submit button. This will generate a new chart with black stars on a white background that will look much better when printed and save ink. You can also resize the chart to fit it on a single page. The default size is 600 pixels, but you can enter any value between 400 and 1600 pixels.

Several folks have reported seeing higher-than-expected flares. We believe our forecasts are correct, and we have gotten multiple confirmations that the position and timing of the blazes are usually highly accurate compared to actual observations. One possibility is that the spectator sees another satellite emitting a flare simultaneously as the projected one.

The most likely factor, however, is that most people overestimate altitudes. A 60° elevation is pretty high in the sky, and you have to lean your head quite far back to see it, and it can appear to be right overhead at times.