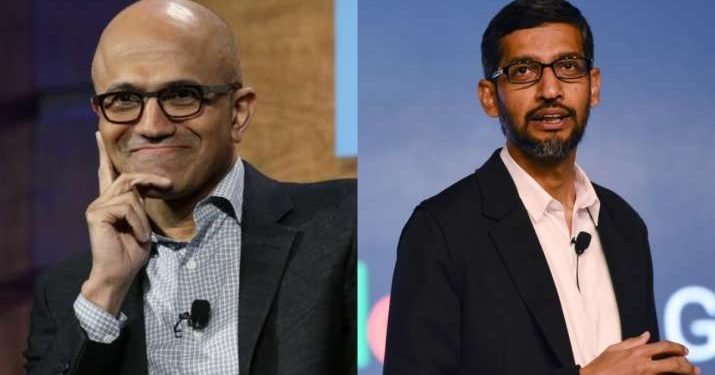 The Padma Vibhushan is the most prestigious of the three awards. The Padma awards recognize persons who have made outstanding contributions to art, public affairs, science and engineering, social work, medicine, commerce and industry, literature and education, sports, and civil service.

Pichai (49) and Nadella (54) are two of the year’s 17 Padma Bhushan recipients. Both have been honored with the Padma Bhushan in the category of ‘trade and industry.’ Each year, the honors are presented on Republic Day. The prizes will be given to awardees during a ceremony at Rashtrapati Bhawan, the President of India’s official home. The event is often held in March or April.

The President authorized the conferral of 128 Padma Awards this year, including two pair instances.

Pichai’s career began as a materials engineer. He joined Google in 2004 after a brief spell at management consulting company McKinsey & Co. He was named Google’s future CEO on August 10, 2015, following his appointment as Product Chief by CEO Larry Page. In 2017, he was named to Alphabet’s board of directors.

In 2016 and 2020, he was included in Time’s annual list of the world’s most influential people. Pichai is married to Anjali Pichai, and the couple is the parents of two children. Cricket and football are two of his leisure activities.

Satya Narayana Nadella, on the other hand, was born in Hyderabad on August 17, 1967. (present-day Telangana). His mother, Prabhavati, taught Sanskrit, and his father, Bukkapuram Nadella Yugandhar, was a 1962 batch IAS official.

Nadella attended Begumpet’s Hyderabad Public School before graduating with a bachelor’s degree in electrical engineering from Manipal Institute of Technology in Karnataka in 1988. He subsequently relocated to the United States to pursue a master’s degree in computer science at the University of Wisconsin-Milwaukee, which he earned in 1990.

He received his MBA from the University of Chicago Booth School of Business later that year, in 1997. He is presently Executive Chairman and CEO of Microsoft, succeeding Steve Ballmer as CEO in 2014 and John W. Thompson as Chairman in 2021. Before he was appointed CEO, he served as Executive Vice President of Microsoft’s cloud and enterprise business, where he oversaw the development and operation of the company’s computing platforms.