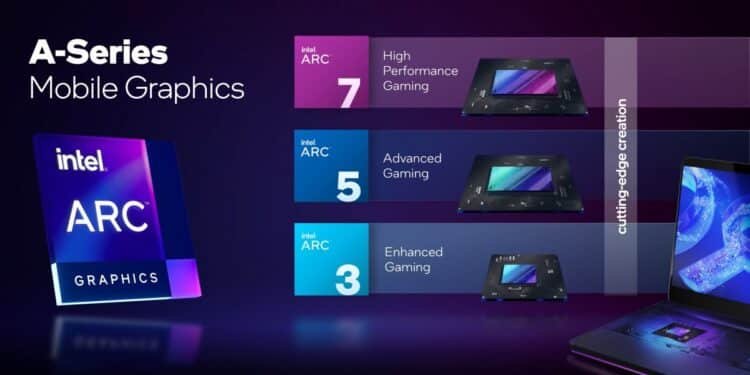 In a special Livestream on Wednesday, Intel finally revealed their standalone Arc Alchemist graphics cards. The first cards to appear are designed particularly for laptops, and they’re among Intel’s most basic GPUs. However, based on reports known so far, Nvidia and AMD should be concerned. 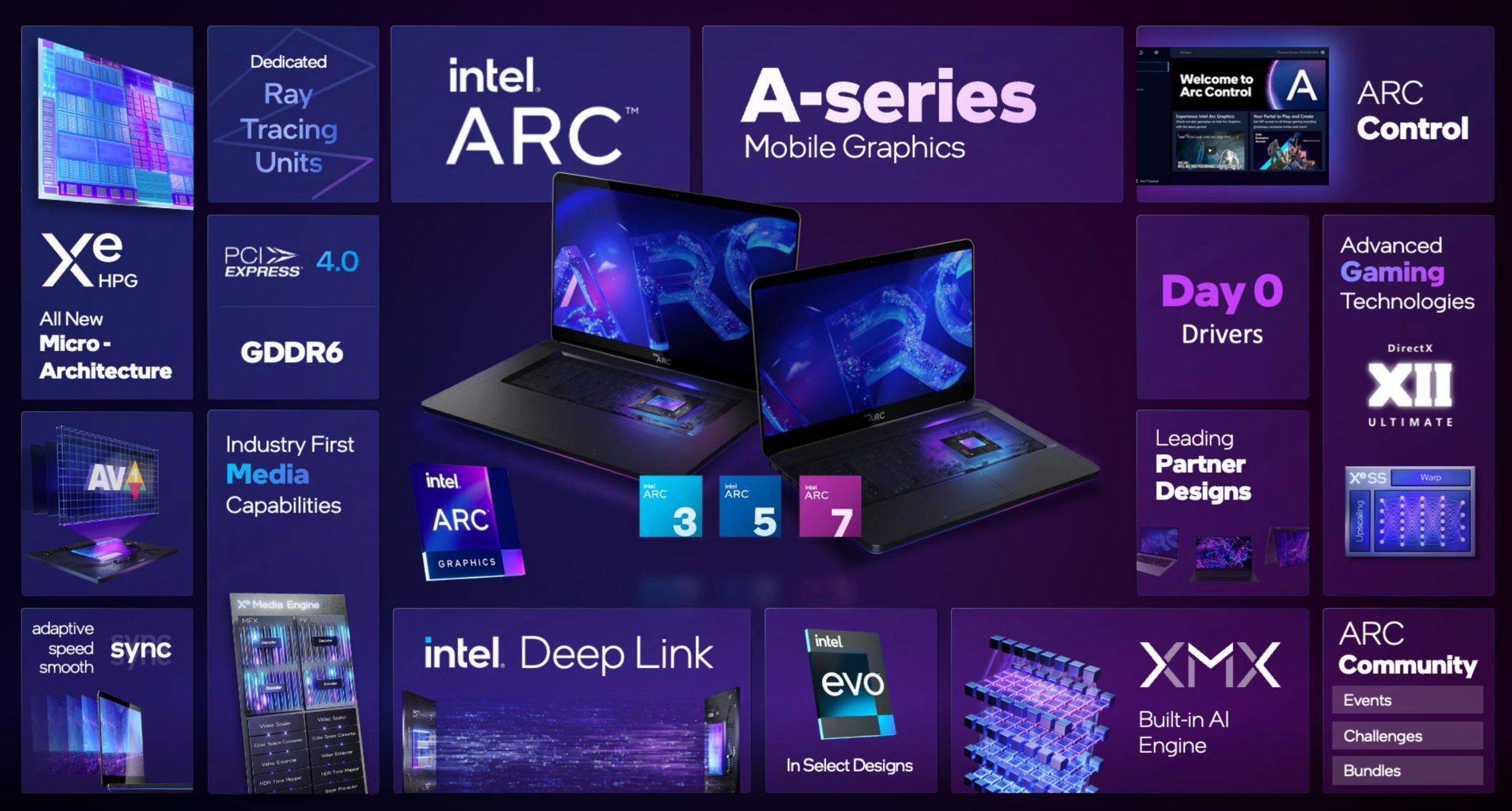 Intel is leading the introduction with its Arc 3-class GPUs, as expected based on speculations regarding Arc Alchemist. Two variants are available, both aimed at thin and light laptops that require a dedicated graphics card. One of the first devices available, the Samsung Galaxy Book 2, was highlighted by Intel and was unintentionally shown off ahead of the announcement.

Arc 5 and Arc 7, which will be available in early summer, are the next steps up the series. Nvidia’s RTX 3080 Ti mobile could be targeted by the flagship A770M chip. Both include 16GB of RAM and a 256-bit bus, indicating how far Intel’s range may extend. Intel, on the other hand, hasn’t made that comparison.

Arc 3 GPUs, according to Intel, compete with cards like the RX 6500M. In reality, this means gaming at 1080p with medium settings and a frame rate of at least 60 fps (fps). According to Intel’s first-party benchmarks, Arc 3 GPUs can achieve 60 frames per second at 1080p. With the lowest prices, they have a 64-bit bus, 4GB of GDDR6 memory, and 6-8 Xe Cores (1,024 ALUs). These will compete with NVIDIA’s GeForce GTX 1650 mobile, which has been the company’s most popular GPU for several generations.

Before drawing any judgments about performance, we always recommend waiting for third-party benchmarks. Intel’s tests, on the other hand, show respectable performance in even the most demanding games, such as Hitman 3 and Doom Eternal. 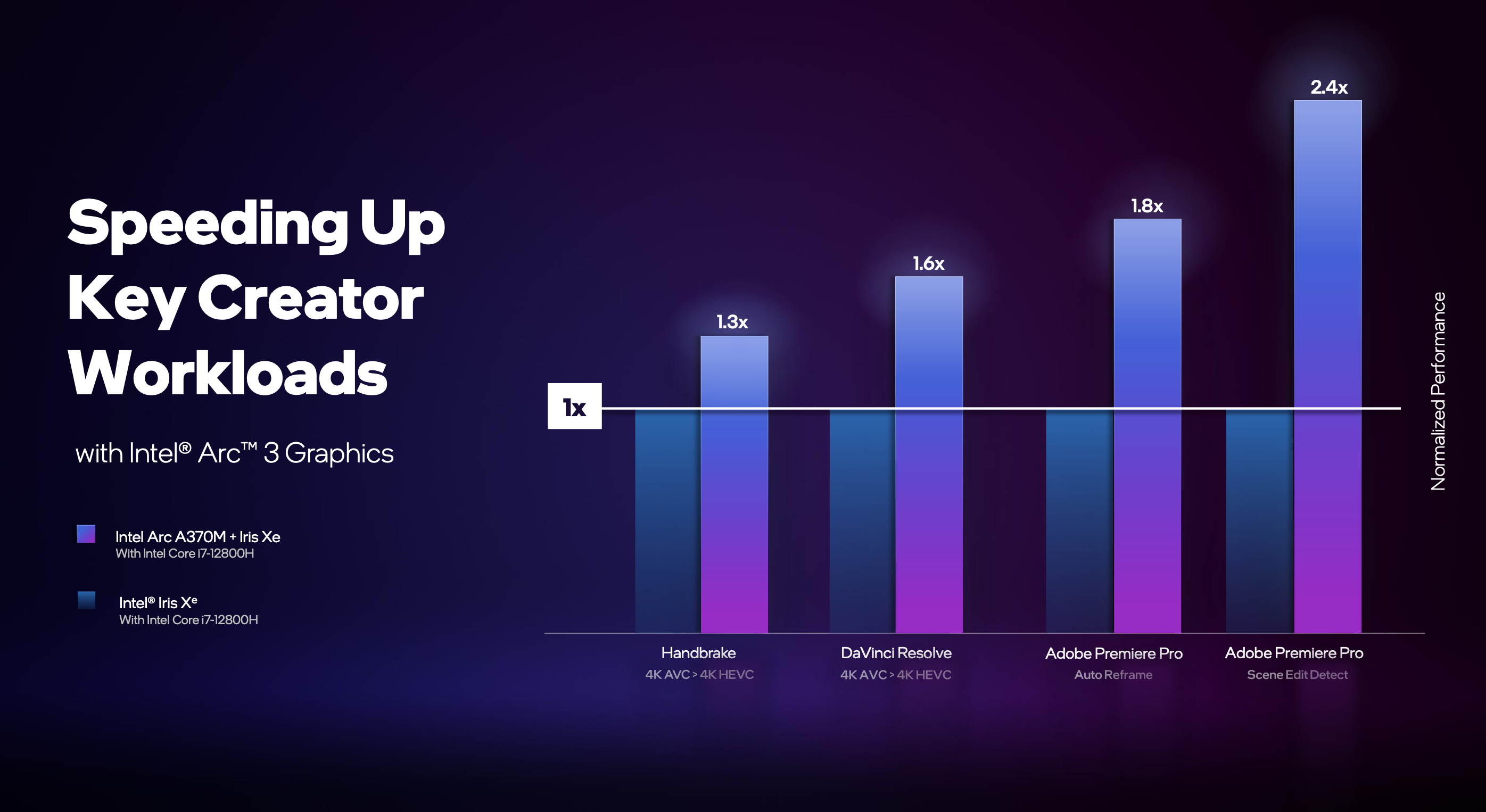 In comparison to Nvidia’s mobile products, Intel’s Arc Alchemist takes a unique approach. Nvidia gives laptop manufacturers a variety of power restrictions for their graphics cards, which makes a significant difference in performance. That’s why the Gigabyte Aero 16’s RTX 3080 Ti doesn’t perform as well as the MSI Raider GE76’s. Intel is also offering a range for selection, however, the company noted that the specifications stated are for the lowest graphics power feasible. As a result, most GPUs should outperform Intel’s stated specifications.

All Arc Alchemist mobile graphics cards, like their desktop counterparts, offer hardware ray tracing, variable-rate shading, and Intel’s XeSS upsampling technology. XeSS, although unveiling new titles that will support the feature, such as Ghostwire Tokyo and Shadow of the Tomb Raider, will not be available until early summer, according to Intel.

Along with the graphics cards, Intel also revealed more information about the software that supports them. According to Intel, Arc Control is a one-stop-shop for drivers, tuning, and gaming settings. It’s comparable to Nvidia GeForce Experience in that it acts as an overlay. Arc Control, unlike GeForce Experience, does not require users to log in.

Arc Control is primarily a delivery system for drivers, but Intel claims it will also display system performance statistics and provide tools for broadcasters. You can employ A.I.-enhanced camera capabilities like background blur, backdrop replacement, and auto framing to stream directly from the software. Intel also stated that customers can alter performance with desktop graphics cards, implying that overclocking capabilities will be available.

The first Intel Arc Alchemist laptops are on the market today, with many more to follow before the other cards come this summer, according to Intel.