Nerf's mascot, Murph has gotten a lot of negative feedback online, with some describing him as "nightmarish," "terrifying," and outright frightening. 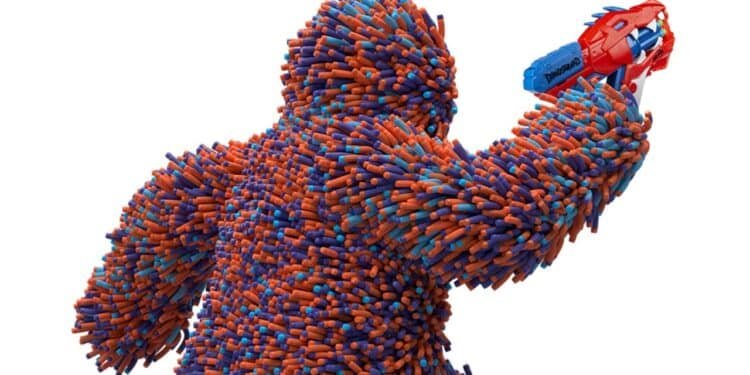 Every so often, a character makes an appearance in popular culture and transforms it forever by bringing about a need the world was unaware it had. Murph, the Nerf toy and game company’s recently announced mascot, may be the most recent to hold that distinction. A humanoid being with a body entirely constructed of Nerf darts, Murph utilizes the nonbinary pronouns they/them. Earlier this month, the character made their appearance with some unanticipated excitement. The odd mascot drew a wide range of reactions on social media, from dread to sincere pleasure.

As of Thursday, it appears that Murph has joined the fray by establishing its own official Twitter account. Murph joked that they “had foam-o” about not being on social media and made their Twitter debut with a fairly appropriate mirror selfie.

Just over 4,000 people are following Murph’s official Twitter account as of this writing, and it only has four accounts that it follows: two official Hasbro accounts, the official ESPN account, and the account for the equally adorable Philadelphia Flyers mascot Gritty, to whom many compared Murph when they first debuted.

Later this month, Murph, which was developed in collaboration with the advertising firm The Martin Agency, will start to appear in Nerf’s advertisements, retail locations, and social media platforms. The “Unleash the Play in You” multi-year marketing campaign will include Murph’s premiere.

As the brand embraces its new image, Murph will appear more frequently on Nerf social media sites and in retail locations. At first, this may be unnerving, but then you consider how many other truly insane mascot companies have used to appeal to children. Murph blends in perfectly with the odd adverts that air during children’s TV programs.

When Murph was initially introduced, Adam Kleinman, SVP and GM of Nerf at parent firm Hasbro, said, “We wanted to develop a mascot that reflects this ageless, unrestrained fun that resides in all of us and produces a physical manifestation of the sensation you get when you play with Nerf.” “Nerf understands that even if screens are amazing, kids and their parents still need to get out, be active, and create memories.”

The anonymous anthropomorphic creature is defined as “a lively spirit and skilled athlete” by AdWeek. In a press statement, Hasbro’s global VP for marketing Adam Kleinman stated that Murph “creates a physical representation of that emotion you get when you play with Nerf” and “represents this timeless, unfettered fun that exists in all of us.”

Murph has gotten a lot of negative feedback online, with some describing him as “nightmarish,” “terrifying,” and outright frightening. Since Gritty, no mascot has commanded Twitter’s attention more than this one. Murph can succeed where the Philadelphia Flyers mascot failed by capturing the attention of the internet. More responses are provided below.

While it’s impossible to predict how Murph’s social media presence will develop in the future, the mascot has already received questions about their physiology, been compared to a variety of cryptids, and been placed in a hypothetical conflict with the now-iconic Philadelphia Flyers mascot Gritty. It seems like the sky is the limit.

Parker Brothers founded the toy company Nerf, which is now owned by Hasbro. The majority of the toys are different foam-based weapons, while other Nerf goods include balls for sports like baseball, basketball, and American football. Their dart guns, which Hasbro refers to as “blasters,” which fire ammunition comprised of “Nerf foam,” are among their most well-known toys (partially reticulated polyether type polyurethane foam). Their catchphrase, “It’s Nerf or Nothing,” was initially used in the 1990s. The Nerf brand generates about $400 million in annual revenue.

How to hire a good Node.js Developer, A step by step guide