Outstanding Web Application Development Frameworks to Use in 2022

Selecting the right web application frameworks is necessary for a successful project. Know about the best frontend and backend frameworks you may use in your project. 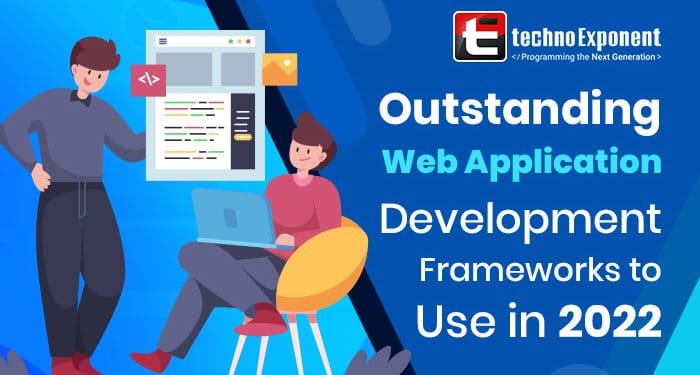 Two common varieties of web frameworks include front-end or client-side framework or back-end or server framework. However, like the previous years, in 2022 also, different frameworks will rule the web app development sector. Explore a few of those from these lines.

As said already, Web app development frameworks are available for both frontend and backend. Here we have listed the best ones among them.

React- React got instant fame after its initial release in 2013. Stackoverflow Developer survey in 2021 crowned it one of the most popular web frameworks in 2021. Besides, 173 K stars on GitHub also show its demand. Leading users of React include Uber, Instagram, PayPal, etc. Best features that have made this one of the best frameworks are:

Angular– It is another sought-after front-end framework developers use rapidly. Google Angular team is the proud manager of it. A Web Development company prefers using Angular to build high-functioning and smooth web apps. Angular web apps are popular among users for easy maintenance also. Proud users of Angular are Lego, UpWork, PayPal. The latest stable release of Angular is Angular 9.1.11. Characteristics of Angular are:

Vue.js- Developers released Vue.js in 2014 to build appealing UIs and SPAs. This web app framework was created as an alternative to React. With the startling presence of 180K stars on GitHub, Vue.js has reached the apex of demand. As per the report of BuiltWith states, around 170K sites are available in the market now. Vue.js has a high prospect to reign the web app development industry soon. Some notable features of Vue.js include:

JQuery- Despite being one of the old players, JQuery has upheld its demand as one of the top web application development frameworks. Developers and users love using this front-end framework for many causes.

In the USA alone, you will find more than forty million sites based on it. Developers introduced it in 2006, intending to build robust web apps. A growing community of developers has helped in the growth of this framework. Qualities that’s make JQuery a leading name are listed below.

Laravel- Laravel won million hearts by its simplicity and elegance after its introduction in 2011. Famous companies that use this technology to build smooth web apps include BBC, GitLab, PayZip, and so on. A website development company prefers it for these qualities.

Express.js- It denotes a node. js-based prompt server-side framework. This backend framework got popular for various reasons. Express.js is one of the best web application development frameworks to build highly scalable apps. As per the survey of Stackoverflow Developer, around 24% of users capped it as one of the highly used frameworks. Features of this framework are:

ASP.NET Core – The latest ASP.NET core refers to a cross-platform web application backend framework. This novel version is famous among users and developers for its lightweight and powerful nature. More than fourteen thousand live sites are based on it.

ASP.NET is one of the leading web application development frameworks that give support to all the platforms, including Linux, Mac, Windows, etc. Some famous names that use ASP.NET are Tacobell, Stackoverflow, etc. To get an idea of this framework, you need to know its features. Learn some of its qualities here.

Hopefully, now you know about the leading front and backend web application development frameworks. Before picking any of them, be sure to explore your needs. And count on the best web app development company to meet your needs. Experts of such companies are the best persons who can pick the best technology for you. Don’t forget to check the company’s reputation, rates, and other relevant factors before finalizing an option.

Hello! I am a full-time content writer at Techno Exponent, an award-winning mobile and web application development company. Apart from writing technical content, I love to spend time listening to music, playing the guitar, and reading masterpieces by my favourite authors. I don’t like to miss any updates about technological advancements in the app world. And I try my best to write interesting and informative content.