The finance industry has been receptive to technology and has seamlessly integrated it within their businesses. Technology has been playing a pivotal role in developing cutting-edge software and improving overall clients’ user experience. The advent of software in the banking business has enhanced various ways of functioning which improves overall banking operations. Not just the banking sector, other sectors associated with Fintech also get a major boost in their business operations.

Now you know when it comes to developing software applications for any fintech industry there are various aspects involved. One such aspect is programming languages which are used to develop an app. It’s critical to understand what the top languages are and why they’re used to develop fintech projects. This is what will provide you assistance in developing a successful financial software development solution that satisfies your criteria.

What is a programming language?

Also, in the case of coding, the phrases coding and programming are sometimes used interchangeably, there are distinctions between the two. Programming is a wide phrase for producing computer instructions whereas coding is a more specialized subset of programming. A programmer considers the larger picture. They identify the problem and devise solutions to it. This design of solutions is called coding. This coding can be performed in multiple languages.

Specifically in the banking and finance sector, there is fintech software developing every now and then. When you see businesses are progressing and developing apps, you know what is backing up such large and newly-invented technologies. It is backed up by programming languages like  C, C++, Python, Matlab, Java, SQL, and others. It would be quite interesting for us to see what each of these programming languages brings to the table for the finance business. Let’s see some of them in detail. 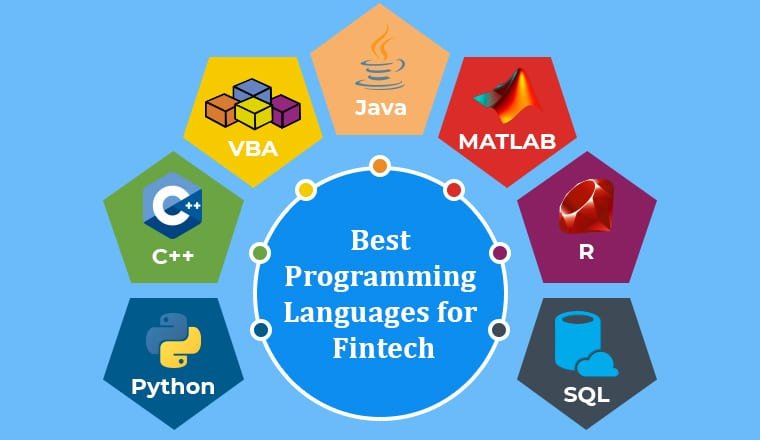 Python is a highly demanded and powerful language in the financial services industry for the development of the application, combined with a severe scarcity of experienced Python programmers is the new challenge. This problem propels to the top of this list for businesses. Python’s handling of things has a certain grace to it. It does not have as deep a learning graph as some of the other languages. It is a high-level language, which makes it more approachable to academics and quants, and this has likely contributed to its popularity.

Python has been extremely closely associated with more advanced technologies like machine learning, data science, and artificial intelligence (AI). These are undoubtedly some of the most cutting-edge applications in banking and fintech, which is why Python is so popular in our finance business.

The reason why businesses prefer Python is because it is a simple language, simple to code, develop and deploy. Python can be used in web application development, machine learning, data science, and much more. Finance applications are quite complex and confusing since the number of transactions is more on a daily basis. But to balance it out, python is used which is extremely easy and simple to use. The syntax is very simple and easy-going and it boosts day-to-day business processes. You can easily work on heavy data apps while simplified, concise, and readable codes. Not just python, there are other languages as well, that suits best for fintech apps and which must be explored without a second thought.

C++ is a general-purpose programming language that was developed in the early 1980s. Despite knowing the fact that it’s old-fashioned, most programmers still favor it for designing financial applications. Because of its speed and efficiency, most programmers who are developing applications for the FinTech industry choose it. The majority of institutions use it for projects that need extensive analysis and calculations and have a large number of operations. It possesses the most advanced technology for both types of analyzing qualitative and quantitative analysis.

C++ is much closer to the machine than most other languages on this list. As a result, it is substantially quicker, making it suited for all types of mobile applications and services. Some of the most inevitable reasons for businesses to consider C++ is because it includes a broad spectrum of tools to help you complete your app development. Allow code rewriting – C++ code can be reused by programmers. It is really useful for creating complicated tasks. Your developer team can be more efficient- and extremely quick. Its efficiency can be attributed to its tight data structures and metaprogramming.

Excel and VBA are widely used in finance. VBA is used on a regular basis by bankers and traders, and it is frequently included in some of our systems. Macros are used to accelerate data-based tasks, and VBA can be used to develop models for risk management, trade management platforms, investment strategies, scenario testing, valuations, and other purposes. Both of these have the same purpose of accelerating the existing way of operations

VBA functions primarily as a force multiplier and time-saving. Rather than wasting time each day fighting with spreadsheets, you may simply streamline your job with macros. There is typically no excuse for not understanding Excel and VBA, and learning it can only make your life simpler.

Java is the object-oriented and most extensively used programming language. Many largest fintech firms are using Java programming language in their software. Most programmers love it because of its various capabilities that assist them to achieve a variety of objectives. Despite the fact that there are other alternative programming languages, Java remains popular, and large financial organizations such as banks continue to use it to operate their consumer front page.

Java’s prominence in the banking industry might be attributed to its better security and cross-platform capabilities. Security is essential in banking, and the ability to deliver your application to consumers on a number of platforms is also essential. Java has comprehensive and simple security APIs, as well as a security manager that can isolate questionable code, virtual machines, and so on.

Java also provides unrivaled stability, which is vital for mission-critical financial applications. Not to mention its ability to run on any device thanks to the utilization of virtual environments. If you want to design front-end applications for banks or FinTech companies, go with Java.

MATLAB is another popular name in the finance world. There are so many companies using Matlab for their financial operations. It is handy for mathematical expressions like floating point, linear algebra as well as making charts and other interactive financial chores. Indeed, it is well-known for its outstanding charting tools. It is also a highly rapid language to code, which makes it appealing for traders or structures who need to try things out in a fast-moving market.

The finance business has many applications undergoing simultaneously and this makes the whole process slow if you don’t opt for a better programming language. Matlab ranks among the top ones in the list especially in the finance sector for delivering high-performance and enhanced business progress.

While the higher learning curve may deter some users, those who persevere are rewarded. In the long term, you are likely to be more equipped for data applications than individuals who are fluent in another language. It also implies that you will face less competition while hunting for employment that matches your unique skill set.

Now comes the last one- SQL. It is a very important language in the finance industry. SQL is a structured query language that does not demand any programming skills. You will most likely need to learn to deal with the massive amounts of data in the finance sector that your business generates. SQL was already a favorite of the business since it is required to analyze previous legacy data, process data, detect patterns, and forecast future performance utilizing all of that knowledge. And it is becoming much more popular as a result of the advent of data science and analysis.

SQL is essential in dealing with structured data where relationships between multiple variables must be maintained. Finance, maybe more than any other business, contains a large amount of such data with intricate linkages. The chances of data manipulation are quite less and hence financial data of the banking sector is at less risk. SQL is used by business and financial analysts to discover patterns and convert them into comprehensible insightful data.

Everyone knows that the financial industry undertakes critical jobs. There are volumes of transactions of data and finances which is immeasurable. You need a robust and secure database system to protect your business from any type of data breach. Businesses around the globe consider programming languages of utmost importance because that’s where their data security is dependent. So, from the blog, we hope you are clear about what programming language will suit your finance business the best. This will improve the overall functioning of your fintech business app as well as your productivity. So act wisely and choose the best from the rest.

Mathews Jacob is a tech enthusiast and part-time blogger.