Empathy's purpose is to assist families in dealing with loss by providing both emotional and logistical support in their time of need. 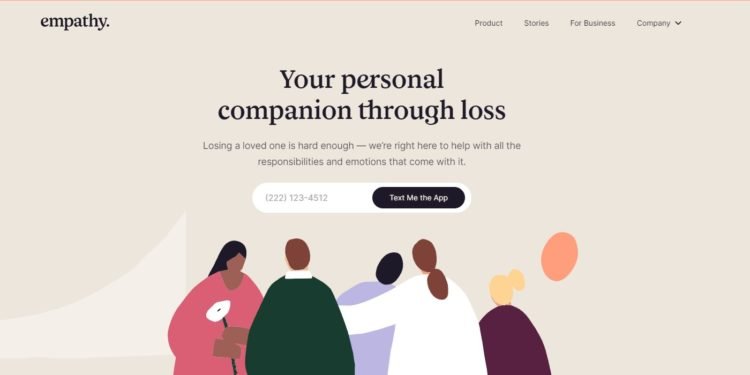 Empathy, a startup that emerged from stealth earlier this year with a digital assistant aimed at assisting grieving families in navigating the choppy waters caused by the death of someone close to them — with a diverse range of services ranging from providing links to counseling to assisting in the planning of estate paperwork and taxes — is capitalizing on that opportunity. It has already received $30 million in investment as a result of the high demand for its services.

Every year, millions of Americans lose a loved one, leaving many families in pain not just from their grief but also from the practical problems that follow. In the weeks and months that follow, families spend over 500 hours dealing with urgent requirements like funeral planning and will validation, as well as long-term activities like account cancellations, estate administration, benefit claims, and property cleaning.

Empathy’s purpose is to assist families in dealing with loss by providing both emotional and logistical support in their time of need. Empathy’s application, powered by technology and motivated by purpose, simplifies and streamlines end-of-life bureaucracy with tailored planning and bereavement support. Empathy has offices in New York and Tel Aviv, was established by Ron Gura and Yonatan Bergman, and is funded by VC companies General Catalyst and Aleph.

Series A follows Empathy’s $13 million seed round, which was disclosed just five months ago. Entrée Capital led the latest investment, which was co-led by General Catalyst and Aleph, as well as LocalGlobe, Primetime Partners, and prominent angel investors including Shai Wininger (CEO & co-founder of Lemonade), Sir Ronald Cohen, John Kim (ex-president of New York Life), and Micha Kaufman (CEO & co-founder of Fiverr). The firm does not reveal its value.

Part of the rationale for Series A’s quick delivery is to assist Empathy in meeting what has proven to be considered early demand. The company’s technology was developed in Israel, but it opted to debut in the United States, where co-founder and CEO Ron Gura said that it already has a “good, single-digit percent” market share, with around 250,000 bereaved executors visiting and utilizing Empathy’s services each month. These services vary from practical estate planning and tax tools to referrals to counseling and other forms of assistance.

“Some tourists come for practical reasons, while others come for spiritual reasons,” he explained. When you think about it, having one side by side with the other obviously offends individuals searching especially for one service, only to be confronted with another, thus Empathy’s ability to develop and maintain such a platform is an accomplishment in and of itself.

It is also expanding its company by collaborating with other players in the end-of-life process, such as hospice institutions and funeral homes. 300 cemeteries and 72 funeral houses send clients to Empathy. The reason for this is simple: bereaved families frequently begin to ask questions of those involved in the final phases, but those people’s attention is on the work at hand, as much as they would like to assist with other elements and give comfort.

“When families walk into the hospice, they know the reality is just around the corner,” Gura explained, “and they turn to the coordinator.” He also stated that all coordinators want to do is assist: they are typically wonderful individuals working in a complicated area, but they have limited resources and talents since they must go on to the next family.

“In this circumstance, the funeral director is the closest thing to a concierge,” he said, ironically, but yet just speaking the truth. It is not an easy or glamorous job, but it must be done, so having a company building some help that takes some of the pain of figuring things out for yourself, in a way that is not an invasive and expensive business in and of itself (some services are completely free; others are not) is not such a bad thing.

“We are delighted to continue to support Empathy as it solidifies its position as a market leader in the end-of-life sector and delivers a service that is extremely important for families dealing with loss,” said Joel Cutler, MD of General Catalyst. He further stated that Empathy has demonstrated its dedication and desire to reach as many families as possible by collaborating with firms from various industries to engage with broad audiences and attracting the best and brightest to advance their goals. They are excited to see Empathy continue to demonstrate how technology can make a significant difference for grieving families.