Intel and Samsung are Getting Ready for ‘Slidable’ PCs

Foldable is out, slidable is in. It's a new effort to come up with a different type of laptop 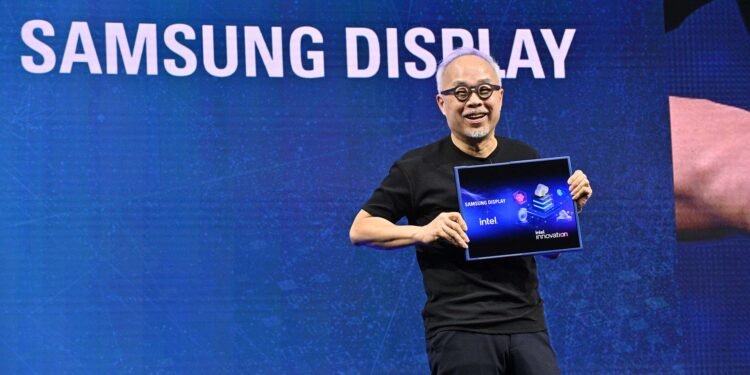 The Intel Innovation 2022 event certainly offered major news from the firm on its new technology that is open to everyone, and one of the most recent is a 17-inch slidable display PC prototype. Intel and Samsung collaborated to provide this expandable display to everyone, but there is no word on when it will be released or available to everyone.

“We’re introducing the world’s first 17-inch slidable PC display,” Choi stated. “This gadget will meet a variety of demands for a bigger screen as well as portability.” Samsung Display has decided to use sliding (rather than folding) technology for its flexible PC screens, and Choi appeared to imply that “foldable is gone” on PCs for the time being.

Intel has been experimenting with novel PC form factors for years and was previously planning for a dual-screen and foldable future until Microsoft abandoned its ambitions for Windows 10X foldable. These new form factors sorely require software and apps to flourish, and it’s unclear how Intel can make slidable PCs a reality.

Intel and Samsung came up with a concept for a PC: a “slidable” gadget with a screen that expands to a considerably bigger size when you lift the edge.

The slidable PC resembled a tablet since it lacked a keyboard. However, with a screen diagonal ranging from 13 to 17 inches, it was more akin to a laptop.

According to Gelsinger, the gadget will meet the criteria for both a huge screen and mobility. It shows what is possible with OLED display technology integrated onto a flexible plastic substrate.

It’s unclear when or if the slidable PC concept will become a reality. However, the design demonstrates how the PC industry continues to experiment with new technology in order to go beyond classic clamshell laptops with a keyboard and screen connected by a hinge.

Moving elements and flexible components add to the complexity and dependability concerns. Costs rise as well, causing anxiety in a dwindling PC market.

However, unique designs may find a niche, and luxury PCs are outperforming cheap PCs, according to Michelle Johnston Holthaus, president of Intel’s PC chip business, who spoke at the conference.

Samsung unveiled a slidable phone screen, among other unique ideas, earlier this year.

Although the slidable PC prototype lacked a keyboard, Holthaus believes one may be added as the design evolves, for example by folding out from below.

The prototype gadget unveiled today by Samsung Display and Intel effectively converts a 13-inch tablet into a 17-inch monitor using a flexible display and a sliding mechanism. On one display, Intel was eager to highlight its new Unison software, which seeks to connect Intel-powered PCs to smartphones – even the iPhone.

Intel Innovation asked Joo-Sun Choi, CEO of Samsung Display, to attend Intel CEO Pat Gelsinger’s Keynote Address to discuss the two firms’ latest partnership, which includes the new 17-inch slidable display PC. It is part of Intel’s Developer Challenges, which give a fresh design on PC screens for future usage, as well as the ability to make them smaller for individual requirements.

Choi showed the audience the device’s extensible characteristics, and here he rips off one end to expose the secret extra space that will soon be accessible for PCs.

Intel also published a GIF on Twitter demonstrating how the gadget works in stretching the device’s surface to a 17-inch screen from a smaller size when stowed.

“We’re introducing the world’s first 17-inch slidable PC display,” Choi stated. “This gadget will meet a variety of demands for a bigger screen as well as portability.” Samsung Display has decided to use sliding (rather than folding) technology for its flexible PC screens, and Choi appeared to imply that “foldable is gone” on PCs for the time being.

According to Intel and Samsung, this new gadget “opens up a world of possibilities” with what it offers, and it is designed to bring the PC experience in a resizable and portable form factor for everyone. Both firms have provided no other details or specifications for the gadget, but it does give a method to transport one’s job or personal requirements with them to different locations using the device.

Displays that fold and roll

One thing 2020 taught us is that health is money, and it is critical to the globe, particularly with the development of the pandemic. However, it also delivered the world a plethora of folding and rollable display technologies from smartphones to monitors, resulting in a more robust and flexible screen for everyone’s requirements.

Samsung is a global leader in producing the world’s folding and extending displays, particularly with the Samsung Galaxy Z Fold and Z Flip series, which are now available to everybody.

However, another South Korean technology company, LG, unveiled a prototype at CES 2021 for a new extensible smartphone display.

The LG Rollable is the company’s take on extensible screens, but tragically, smartphone development was halted before it reached the market.

Corsair also showcased their version of a folding gaming monitor that can be converted into a curved display or a conventional flat surface.

The current partnership between Intel and Samsung on the prototype displayed in the latest presentation is one promising gadget for a slidable display for PCs, but no other information was provided.

How Much Does It Cost to Make an App Like Bumble.