Medicine and the Metaverse: New tech allows doctors to travel inside of your body 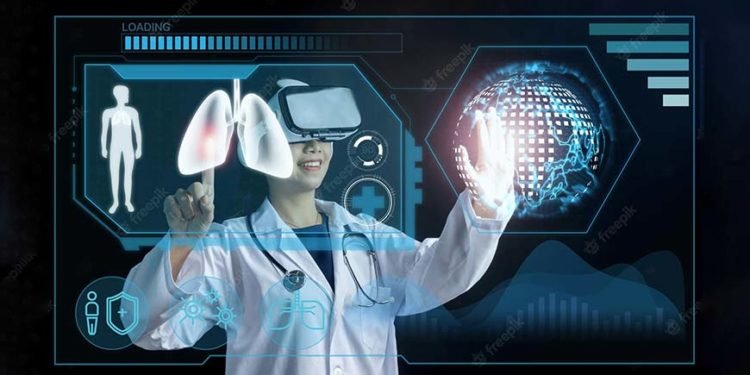 The technological world is rapidly shifting from third-person print media viewing to first-person immersive media viewing. This major shift in mainstream computing, recently dubbed “Metaverse,” has sparked a new wave of excitement about the core technologies of virtual and augmented reality. However, there is a third area of technology known as telepresence that is frequently overlooked but will become an important part of virtual worlds.

Virtual reality immerses users in a simulated world, whereas telepresence (also known as telerobotics) transports users to remote locations, allowing them to look around and perform complex tasks. The concept can be traced back to science fiction in the 1940s and a seminal short story titled Waldo by Robert A. Heinlein. Combining this idea with Fantastic Voyages (1966), we can imagine tiny robotic blood vessels entering the body and swimming around under the control of a doctor who diagnoses patients from the inside and even performs surgical tasks.

This may sound like science fiction, but a startup in Hayward, California recently “flew” a tiny robot inside a human subject’s digestive tract. Endiatx is the company, and I had the opportunity to speak with CEO Torrey Smith about their technology and vision. As a technologist who has been involved in telepresence research since its inception, I am impressed with Endiatx’s progress.

Metaverse will have the first remote robot prototype

Over 30 years ago, the first encounter with an immersive remote-controlled robotic system happened, everyone remembers the first time they looked into the headset. It was 1991, and NASA had some of the first prototypes of mobile telerobotic systems in their lab. It was created by Fake Space Labs and Telepresence Research and allows you to control a mobile robot using a camera system that sends back real-time stereo images.

The early system was very impressive at the time, and it was developed by some of the field’s top researchers. If you want to take your hardware to a trade show, you’ll probably need a large van or even a U-Haul truck.

It is unthinkable to think of shrinking such a system to the size that a person can swallow and control with the help of a doctor. So, what were the early telepresence application areas proposed?
Initially, the emphasis was on allowing humans to work in hazardous environments, such as cleaning up nuclear accidents, repairing satellites, or even repairing leaking oil wells on the ocean floor.

It was cutting-edge research in the early 1990s, but no one ever considered shrinking the technology to a size that could “fly” inside the human body to diagnose and treat patients from the inside.

The Endiatx team’s recent technological success. They were founded in 2019 and have developed a little robotic drone that can be eaten by a human patient and remotely controlled over the stomach and other areas of the digestive tract. Their prototype technology, called PillBotTM, is essentially a small remote-controlled submarine the size of a multivitamin that broadcasts live video back to a doctor’s computer or mobile phone. It works; it has been tried on both cadavers and living individuals.

In an interview, CEO Torrey Smith stated that as a child, he was inspired by the sci-fi film Innerspace (1987) and has been thinking about the notion ever since. He ultimately walked inside Endiatx a few years ago to bring the vision to reality. Thus far, so good. Torrey is the first person on the earth to fly a robotic drone around his stomach, and his firm is bringing this skill into healthcare as a transportation product. He volunteered and ate the first prototype’s fantastic journey.

Others within the firm have swallowed the functioning prototype numerous times since the original testing, collecting live videos that will one day be used to check patients for ulcers, gastritis, cancer, and other possible diseases.

That day is not far away; the team is presently undertaking cadaveric experiments with Mayo Clinic doctors and hopes to conduct FDA-approved studies. If everything goes as planned, PillBot might be diagnosing patients all over the world by 2024.

This might be a major help for folks who see the doctor because of stomach aches. Unlike traditional endoscopic treatments, which can need anaesthesia and numerous visits, this tiny swallowable robot saves time, money, and complexity by allowing doctors to view inside a patient swiftly and simply. Because the untethered Pillbot possesses the complete 3D movement of a miniature robotic submarine, it can enable more flexible control than typical endoscopes. It even resembles a little submarine, complete with tiny engines and propellers, as well as cameras, batteries, and a wireless link that transmits photos to physicians in real-time.

Doctors may already fly the tiny drone using a regular Xbox gaming controller, but the business intends to operate it with any phone’s touchscreen. This is because their goal is to produce a single-use gadget that can be mailed to your home and ingested during a telemedicine session with your doctor, who can examine camera data in real-time from their PC or mobile phone.

Endiatx believes the robotic tablets, which cost $25 to create and sell for hundreds of dollars each, may save thousands of dollars in medical expenditures incurred by performing endoscopic operations under sedation. However, the business claims that PillBots will save many lives by providing faster, less expensive screening that can detect critical illnesses sooner than conventional approaches.

The business hopes to start its first clinical study later this year, followed by a clinical version and a home version. Once they have a tool that allows surgeons to see inside the body, they want the gadget to obtain tissue samples and conduct other surgical duties. In the long run, they hope to decrease their robotic drone to the size of a grain of rice, allowing them to expand their capabilities outside the digestive tract. Their objective is to make all of these features available for home usage, with doctors operating the robot through telemedicine.

The future of telehealthcare?

AR and VR are more than simply intriguing new technology; they have been shown to improve immersive learning throughout the healthcare spectrum.

Immersive Technologies, such as Augmented Surgery, will be employed more and more in the next years to increase the accuracy and efficacy of present operations. People’s capacities as caregivers and patients will be improved, and access to life-saving knowledge and crucial skills will be provided in ways that no other technology can equal.

In this situation, the sci-fi idea of small drones eaten by patients and remotely controlled by physicians during telemedicine consultations might become a reality.

VR’s potential in the healthcare sector is only limited by the inventiveness and ingenuity of those developing and using the technology. Virtual reality technologies will serve to bridge rather than increase divisions, and in the end, the virtual will help us all become more human.

Because we’re talking about strong diagnostic instruments supplied by mail, everyone was wary of the telemedicine perspective of little robots like these. Will the medical community accept this transition, or will it insist on keeping this capability in clinics and hospitals?
That’s when Amazon issued a press release this week announcing its roughly $4 billion acquisition of healthcare firm One Medical and declaring its intention to redefine the healthcare experience.

Facebook to Reward with Ad Revenue for Using Malone's Music in Videos.