The company had opted for a square-shaped camera design for the OnePlus 10 Pro. 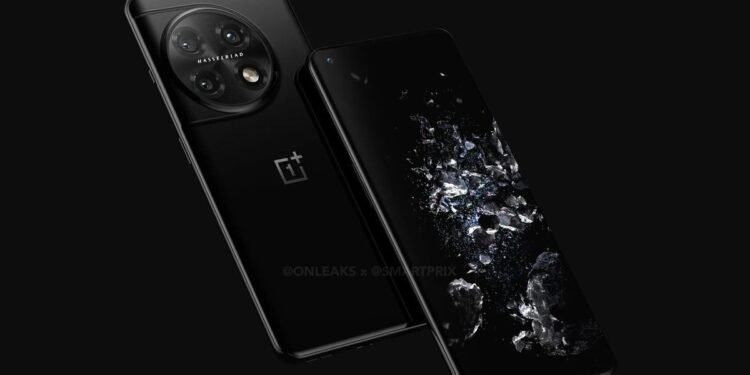 OnePlus is presently developing its highly anticipated smartphone series, the OnePlus 11. While not much is known about the new phone, leaked renderings of the OnePlus 11 Pro have emerged online, giving a sense of the design.

OnePlus released the OnePlus 10T 5G in August of this year, and just one month later, speculation has switched to the OnePlus 11 series. According to recent leaks, the OnePlus 11 Pro will have a redesigned circular camera island and will reintroduce the alert slider.

According to the reported renderings, the OnePlus logo may be shown in the middle of the rear panel of the OnePlus 11 Pro. The phone appears to have a hole-punch cutout in the upper-left corner of the display, which is presumably where the selfie camera will be housed. The images also indicate that the bezels on the OnePlus 11 Pro will be slim.

The volume rockers for the phone are visible on the left spine. According to a recent source, OnePlus will release a new phone at the end of 2022 or 2023. This smartphone is expected to be the OnePlus 11 Pro. The phone will be powered by the SM8550 chipset, which is expected to be a Qualcomm Snapdragon 8 Gen 2 SoC.

According to the report, the tipster also indicated that the new phone will focus on “texture and performance.”

A Hasselblad-endorsed camera was deleted from the recently introduced OnePlus 10T. According to these mockups, the OnePlus 11 Pro camera will once again retain the Hasselblad moniker, albeit this might be the final OnePlus flagship device to cooperate with the Swedish camera maker. After being introduced alongside the OnePlus 9 series in 2021, the collaboration was expected to endure only three years.

On the front of the OnePlus 11 Pro, we notice a curved display with a punch-hole for the selfie camera. If the next OnePlus smartphone mockups are correct, we may see a Hasselblad-endorsed camera on the 11 Pro.

The renderings also appear to be from an early version of the gadget, so we expect things to alter in the future. According to the leaked renders, the OnePlus 11 Pro camera will have the Hasselblad label. However, this may be the final time Hasselblad collaborates with OnePlus after a three-year cooperation.

The camera housing has been modified, moving away from the square shape seen on the OnePlus 10 Pro and toward a bigger, circular design with a half-pill-shaped edge.

This isn’t the first time OnePlus has employed a circular camera housing on a phone (a noteworthy example being the OnePlus 7T), but the triple camera configuration seen in the renderings is far bigger than prior releases.

The smartphone will include a triple-back camera setup with an LED flash. The OnePlus logo would be placed in the centre of the rear panel, according to the drawings. The supposed illustrations of the OnePlus 11 Pro, which are based on the phone’s early prototypes, have been leaked.

Finally, the leaked renderings reveal the return of the popular alert slider, a feature that OnePlus promised would return on future models after it was absent from the OnePlus 10T.

Prior to its debut, all OnePlus flagships included a slider for quickly switching between Sound, Vibrate, and Mute modes. However, it is still unclear if the alert slider would be limited to the OnePlus 11 Pro models or whether it will be included in the vanilla version.

OnePlus said at the time that deleting the function freed up room for a larger battery and enhanced antenna signal. The Alert Slider will also be available on future OnePlus smartphones, according to the firm. Let’s see whether OnePlus follows through on its promise.

There were fears that the slider will be limited to Pro-branded devices rather than all OnePlus flagships, but we won’t know for sure until we hear some official details.

It is expected to be the company’s flagship smartphone in 2023. According to the images, the alert slider will be situated on the right spine of the phone, near to the power button. The phone may include an LED flash and three rear cameras with the Hasselblad brand. The camera module’s perimeter is shaped like a half-pill.

There are no additional specifications or pricing details in these leaks, but recent speculation suggests that the OnePlus 11 Pro may be powered by the Snapdragon 8 Gen 2 processor, which is not surprising given that the flagship series is typically powered by the latest and most premium Qualcomm Snapdragon processor on the market.

Qualcomm typically announces its next-generation CPU at its annual conference in December. The OnePlus 11 Pro, like the OnePlus 10 Pro series, is slated to be released in early 2023.

OnePlus Technology, which is majority owned by Oppo, a subsidiary of BBK Eletronics, as well as Realme, Vivo, and iQOO, intends to debut the much-anticipated OnePlus 11 Pro series in the middle of next year.